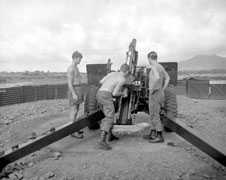 Members of the Royal New Zealand Artillery in Vietnam

The Otago researchers, who are part of a University research theme called “Health of Veterans, Serving Personnel and their Families”, traced and studied the health records of 2783 of the 3394 New Zealanders who served in Vietnam between 1962 and 1971.

The study is the first complete census of a Vietnam veteran cohort using routinely collected data that allows a comparison with disease rates in the general population.

After comparing veterans’ hospital admissions between 1988 and 2009 with those of similarly aged males in the general population, the team, led by Associate Professor David McBride, found an 18 per cent increase in hospitalisations for the veteran group.

The hospitalisations that showed a two-fold or more increased risk between 2006 and 2009 were diabetes, retinal disease, phlebitis, pneumonia, COPD, intestinal obstruction, other liver disease, CRF, skin infection and joint injury.

The present study did not look at cancer rates, but earlier research by Associate Professor McBride showed that New Zealand Vietnam veterans had double the rate of chronic lymphatic leukaemia of the general population.

Veterans’ rates of COPD were 300 cases compared to the 178.3 cases expected in the general population, and there were 461 cases of CRF compared to the 380.8 in their non-serving peers.

Associate Professor McBride says that while chronic renal failure has only limited attribution to veteran service, this condition and COPD have the potential to have high costs, both to the individual, and the health system.

“Now that we know that Vietnam veterans are at greater risk of such conditions, we can put this knowledge to good use. For example, early detection and treatment of CRF may prevent veterans suffering end-stage kidney disease,” he says.

In their research paper, newly published in the UK journal BMJ Open, Associate Professor McBride and his co-authors suggest that routine surveillance of veterans by way of a “flag” in national and primary care databases would enable the recognition of service-related conditions and appropriate healthcare provision.

The study was funded by New Zealand Veterans Affairs through a grant from the War Pensions Medical Research Trust Fund with financial support from the Royal New Zealand Returned and Services’ Association (RSA) and the encouragement of the Ex-Vietnam Services Association.