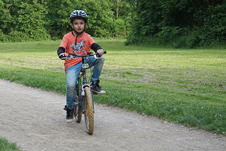 A new University of Otago study of 8–12-year-old New Zealand children’s bicycle safety has found that many children aged under 11 are unable to safely complete a practical cycling skills assessment.

More than 220 pupils at four Central Otago primary schools were assessed on their cycling skills as part of a study carried out by Otago medical student Rebecca Bromell in Alexandra, Omakau and Clyde.

They were tested on their ability to start biking, to perform left-hand, right-hand and stop turning signals for at least three seconds, and to look over their right shoulder and identify a potential hazard, all while maintaining control of their bicycles and without straying outside the lines of a model cycle way.

In contrast, the percentage of those aged 11 and 12 who completed the tasks safely was 91 and 93 per cent, respectively.

The research also involved a questionnaire to assess the children’s cycle safety knowledge and a check of their bicycles and helmets.

Ms Bromell, who undertook the research for the Child Injury Prevention Foundation, says that she sought to explore factors contributing to children’s risk of having, or being injured in the event of, an accident while cycling.

“Currently the New Zealand Police and New Zealand Transport Agency recommend that ‘children under 10 years old cycle on the road only when accompanied by a competent adult rider’.”

“However as the study showed, one in four 10-year-olds were not able to perform the practical assessment without losing control of their bicycles or veering out of the cycle lane, but this number dropped to one in ten of 11-year-olds,” she says.

Ms Bromell says these findings suggest that parents should confirm for themselves that their child is aware of and understands the road rules, and is competent at performing the required hand signals and other manoeuvres necessary to cycle safely.

Of the 214 helmets checked in the study, 41 per cent were deemed “unsafe” because either the helmet was damaged, worn incorrectly, or there were problems with the straps being either too loose and/or wrongly positioned.

Eighty-five of the 205 bicycles checked (41%) were not considered roadworthy by the cycle store staff assessing them. Three-quarters of these non-roadworthy bicycles had worn brake pads, which would impede the ability to make an emergency stop.

While not included in the roadworthiness criteria, 60 (29%) of the 205 bicycles were found to have badly underinflated tyres, which would make them less manoeuvrable.

Around two-thirds of the children in the study said they usually rode their bicycles to school. Helmet safety and roadworthiness data were available for 127 of these children. This showed that nearly 60 per cent had either a bicycle that was not considered roadworthy or a helmet that was judged “unsafe”.

Ms Bromell says there are several important recommendations emerging from the study results.

A PDF of the study report is available upon request.