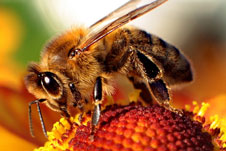 In their study, researchers from the Departments of Zoology and Chemistry collected bees from 51 hives across 17 locations in the province of Otago in Southern New Zealand and measured their chlorpyrifos levels. They detected low levels of pesticide in bees at three of the 17 sites and in six of the 51 hives they examined.

Detecting chlorpyrifos was not a surprise. In 2013, Associate Professor Kim Hageman and her team from Otago’s Department of Chemistry showed that chlorpyrifos was detectable in air, water, and plant samples even in non-sprayed areas of the country, because this pesticide has a high ability to volatilise and travel great distances.

In the laboratory they then fed other bees with similar amounts of the pesticide, which is used around the world to protect food crops against insects and mites, and put them through learning performance tests.

Study lead author Dr Elodie Urlacher says they found that chlorpyrifos-fed bees had worse odour-learning abilities and also recalled odours more poorly later, even though the dose they ingested is considered to be "safe".

“For example, the dosed bees were less likely to respond specifically to an odour that was previously rewarded. As honeybees rely on such memory mechanisms to target flowers, chlorpyrifos exposure may be stunting their effectiveness as nectar foragers and pollinators,” Dr Urlacher says.

“This amount is thousands of times lower than the lethal dose of pure chlorpyrifos, which is around 100 billionths of a gram. Also, it is in the low range of the levels we measured in bees in the field.”

The current study is the first to establish the threshold at which a pesticide has an effect on memory specificity in bees while also measuring doses in bee populations in the field, she says.

“Our findings raise some challenging questions about regulating this pesticide’s use. It’s now clear that it is not just the lethal effects on bees that need to be taken into account, but also the serious sub-lethal ones at minute doses,” Dr Urlacher says.

The research, which appears in the Journal of Chemical Ecology, was supported by the Marsden Fund of New Zealand.