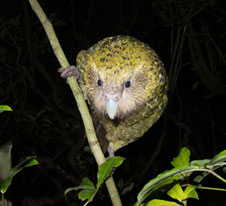 A University of Otago zoologist is a member of an international research team with the ambitious aim to sequence the genomes of all 125 known living kākāpō, a critically endangered flightless New Zealand parrot.

“It will also be a world-first scientific achievement as no-one has sequenced the genome of every surviving member of a species before,” Associate Professor Robertson says.

The new crowd-funded project is a collaboration between researchers from the Department of Conservation’s Kākāpō Recovery Group, the University of Otago, Duke University (USA), the Genetic Rescue Foundation and NZ Genomics Ltd (NZGL).

In a guest post on the Genes to Genomes blog, Associate Professor Robertson explains that kākāpō were historically a widespread species, but reached a low of only 51 birds in 1995, and the world population now stands at a hard-won and intensively managed 125 individuals.

He writes that “a genomics approach to kākāpō conservation will be a great boost to the recovery programme.

“A genome-wide understanding of genetic variation will help to develop breeding strategies to retain variation at genes important for species persistence, such as the immunity genes and their role in kākāpō diseases.

“We will also be able to explore the genetic basis of infertility in kakapo; only 60% of eggs hatch (normally this should be about 90% in birds) and sperm abnormalities contribute to infertility. Solving the issue of infertility will greatly aid species recovery by maximising reproductive effort.”

The official Kākāpō 125 launch will take place at Zealandia in Wellington in mid-March. The event, which features a talk by BBC science presenter Dr Adam Rutherford, is being organised by NZGL and Genetics Otago.