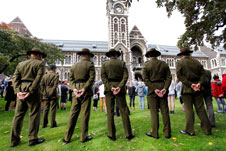 The fifth Anzac Day service run by the Otago University Students’ Association will be held on the Dunedin campus on Monday 25 April, from 1.30pm.

These services began in 2012; so that University students, staff and others could honour those who have died, to value peace, to create a distinctively bi-cultural service by involving Te Roopu Maori, and for anyone who could not attend other services.

University Chaplain Greg Hughson says the number of people attending the campus service has varied from about 500 to about 900, with the weather playing a part in how many turn up for the outdoor service.

This year, University student Sam Darling pipe a welcome as attendees arrive at the Otago University Memorial Walk in front of the Clocktower from 1.15pm, followed by a gun salute at 1.30pm.

If the weather is wet, the service will be in the Main Common Room in the University Union building.

After the service, wreaths will be laid at the end of the memorial walk on the Leith Bridge, which bears a commemorative plaque.

Anzac Day was originally to honour the members of the Australian and New Zealand Army Corps (ANZAC) who fought at Gallipoli against the Ottoman Empire during World War 1.

Now Anzac Day is widely acknowledged as a national day of remembrance for all the Australians and New Zealanders who have served and died in wars, conflicts, and peacekeeping operations, along with the contribution, suffering and sacrifice of everyone who has served.