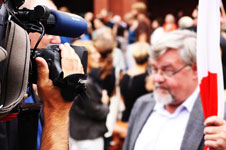 This year’s University of Otago Foreign Policy School will bring together an impressive line-up of national and overseas speakers to explore the complex and evolving interaction between states and “old” and “new” forms of media.

The School’s theme is “Global Politics: From State to Social Media” and it will be opened by Ministry of Foreign Affairs CEO Dr Brook Barrington.

Now in its 51st year, the School attracts academics, students, policymakers, diplomats and members of the public to discuss and debate pressing issues in international affairs. It is being held at St Margaret’s College on the University’s Dunedin campus from the evening of Friday 1 July until Sunday 3 July.

School co-director Associate Professor Paola Voci says this year’s School has attracted an exciting range of speakers, drawn internationally from the UK, USA, Netherlands, and Australia, as well as speakers from New Zealand.

“We will hear from established academics working in the field of media and state policy, and we will also have talks by veteran journalist Mike McRoberts, Maramena Roderick (Head of News, Māori Television) and investigative journalist Nicky Hager,” Associate Professor Voci says.

Co-director Dr Brett Nicholls says the School’s theme is prompted by the shifting relationship between the state and established media, as well as the shifting role of news media in society today.

“We want to examine how, whether located in geographical and economic centres or peripheries, the complex interaction between politics and media has been changed by the increasingly blurring line between top-down and bottom-up flows of information,” Dr Nicholls says.

The topics to be explored range from broader overarching issues such as: what is communication today; the role played by “old” and “new” media in international strategic narratives; public diplomacy; the place of journalism in contemporary society or the effects of foreign news on international affairs; and how new media technology have empowered non-state actors (digital activism).

There will also be focused discussions on: specific geopolitical contexts such as Asia-Pacific news and citizen media; State and social media in India; New Zealand’s changed media landscape; and media's impact on Indigenous affairs policy in Australia.

The School will also feature a roundtable discussion on the Panama Papers and whistle-blower journalism.

The School begins on the Friday evening at 5pm with a cocktail function and Dr Barrington's opening address, and finishes on Sunday around 4.40pm.