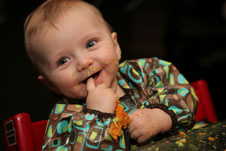 University of Otago researchers have undertaken the first-ever study looking at what infants eat when they follow baby-led weaning and found that they have a lot of healthy eating habits, but also some less healthy ones.

Study co-author and co-Principal Investigator, Dr Anne-Louise Heath, says that baby-led weaning (BLW) is becoming an increasingly popular alternative to spoon-feeding. BLW involves allowing infants from around six months of age to feed themselves all their foods as finger foods, preferably during family meals.

“We found that infants following BLW were more likely to be exclusively breastfed to six months of age, and to wait until then to start solids — which is great news,” Dr Heath says.

They were also more likely to eat meals with their family which should have long-term benefits as they grow. But, surprisingly, they were eating more fat, and had lower intakes of iron, zinc and vitamin B12 than spoon-fed babies, she says.

“Supporters of BLW suggest that it allows the child to be in control of how much they eat as they were when they were breast or formula feeding. Some healthcare professionals have been concerned that this may lead to poorer nutrition and more choking in these infants,” Dr Heath says.

To investigate the latter claims Dr Heath and colleagues compared dietary intake and feeding behaviours in 51 age-matched and sex-matched infants between six and eight months of age. Eighteen were following full BLW, seven partial BLW and 26 were spoon-fed.

They found that the BLW infants had similar energy intakes to those who were spoon-fed, but appeared to have higher intakes of total fat, saturated fat, and fat as a percentage of energy.

“In contrast, average intakes of iron, zinc, and vitamin B12 were lower in the full BLW group,” Dr Heath says.

In the study the researchers write that they “observed that a worryingly high number of parents in all three groups were offering foods thought to pose a choking risk”. For the BLW group the most commonly consumed choking risk foods were raw vegetables, raw apple and dried fruit, while for the spoon-fed group it was rusks, small pieces of meat, crackers and corn kernels.

Dr Heath says that further research in a larger group of infants is needed to confirm the study’s overall findings.

“In the meantime, it would be wise for families following BLW to take care to offer their infants a range of foods that are rich in iron, zinc and vitamin B12. All parents should also be given advice on how to prepare foods in such a way that choking risk is minimised. This involves ensuring safe shapes and textures are offered.”

The study appears in the international journal BMJ Open.