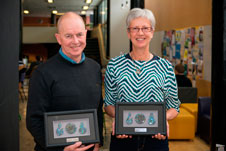 Two Otago scientists who have been at the forefront of this country’s marine biology research for decades have been jointly awarded the New Zealand Marine Science Society’s (NZMSS) inaugural John Morton Medal.

Professors Steve Dawson (Marine Science) and Liz Slooten (Zoology) are the first recipients of the Medal in recognition of their outstanding contributions to the advancement of marine conservation and sustainability in New Zealand.

The medal is named after Professor John Morton, who was regarded by many as one of New Zealand’s greatest marine biologists and was a leader in the establishment of the country’s first marine reserve, Cape Rodney-Okarari Point Marine Reserve, which is north of Auckland.

Professors Dawson and Slooten both knew Professor Morton well. They were taught by him at the University of Auckland, and worked for him doing line drawings for his books. They kept in touch after his retirement. “So getting the inaugural John Morton Medal has special personal significance,” Professor Dawson says.

The pair started their studies of the endangered Hector’s dolphin in 1984. The citation for the medal notes that this study continues and is now one of the longest-running ecological studies of any marine mammal species. The work is ongoing because gillnets and trawling continue in more than 80 per cent of the range of Maui and Hector's dolphin, causing dolphin mortality.

They began two other long-term research projects in 1990, on bottlenose dolphins in Fiordland, and sperm whales off Kaikoura. These studies continue, underpinning tourism management in these two areas.

The citation also notes that because they are frequent and effective communicators, Professors Slooten and Dawson have become virtually synonymous with science-led conservation of dolphins in New Zealand.

In addition to having written over 150 scientific papers, they have written three popular books on whales and dolphins, more than 30 magazine articles, over 100 conference presentations and 150 public talks. They have given more than 200 media interviews and have had their photographs published in more than 200 national and international publications, including Time and National Geographic.

It is further noted in the citation that the pair has clearly communicated their internationally applauded and recognised research, turning complex concepts into lucid points with strong outcomes and key recommendations.

Alongside this work, they have provided a supportive learning hub for researchers wishing to achieve academic excellence and an incredibly nurturing, fun and stimulating environment for students and often go well beyond the call of duty to support their efforts.

Their award, which is a hei matau (fish hook) crafted out of paua, was presented to the pair at the gala dinner of the joint 2016 conference of the NZMSS and Australian Marine Sciences Association last night.