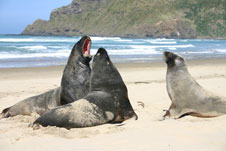 An international research team led by University of Otago scientists has shown that New Zealand’s Chatham Islands were once home to a unique population of sea lion that was driven to extinction soon after first human settlement.

The researchers used ancient-DNA analysis, radiocarbon dating and computational modelling to reveal the relationships of the unique prehistoric population, and also to understand the reasons for its sudden extinction a few hundred years ago.

Dr Nic Rawlence, who carried out the genetic study, says the team found a previously undiscovered lineage of sea lion on the isolated Chatham Islands, 650 km east of mainland New Zealand. The unique prehistoric Chathams sea lion was genetically clearly distinct from the modern population that persists in the Auckland and Campbell Islands, and mainland New Zealand today.

“The regional New Zealand sea lion population now contains only a fraction of the genetic diversity it once had,” says Dr Catherine Collins, who was also involved in the study.

The Otago team used computational modelling to determine the level of human hunting likely to have caused the Chathams sea lion extinction.

“Modelling indicated that hunting rates greater than one sea lion/person/year resulted in the extinction of native populations within 200 years of first human settlement,” says Dr Justin Maxwell, an Otago archaeologist involved with the study.

The findings may also have important implications for the continued survival of New Zealand’s modern sea lions, says project leader Professor Jon Waters. “We used the same modelling approach to estimate the survival prospects for the modern population under different mortality rates.”

Sea lions are listed as endangered in the International Union for Conservation of Nature Red List. With only around 10,000 individuals remaining, the population is in serious decline (50 per cent decline in pup births since 1998), with fisheries bycatch and resource competition the likely culprits.

“The team’s computer models suggest that current reported and unreported bycatch levels may be unsustainable for the long–term survival of the species. Our study adds to the growing evidence that undetected sea lion bycatch may still be driving the decline of the species, something the government’s recently released sea lion threat management plan (TMP) dismisses,” says Associate Professor Bruce Robertson, an Otago sea lion biologist, who was involved in the study.

“Overall, this study is a great example of how ancient DNA can be used to inform conservation strategies of currently endangered species,” says Dr Rawlence.

“What our research shows is that human harvesting and sea lions do not mix. Unless measures are taken to mitigate continuing bycatch levels, the outlook for our sea lions is bleak.”

This Marsden- and Allan Wilson Centre- funded research included team members from the University of Otago, University of California, San Diego, and Southern Methodist University, as well as the Museum of New Zealand Te Papa Tongarewa and Canterbury Museum.

The research appears in the international journal Molecular Ecology.