The visiting delegation, who attended an afternoon reception event in the Clocktower building, was led by Her Excellency Madame Yin Yicui, Chairwoman of the Shanghai Municipal People's Congress – the highest ranking official to visit Dunedin in an official capacity. The group also included Ms Wang Jianjun, President of the Shanghai Media Group, and senior staff from Shanghai’s Municipal Foreign Affairs Office.

Earlier this week, the Dunedin City Council said the main purpose of the delegation's visit was to re-sign the Sister City memorandum of understanding between Dunedin and Shanghai.

Professor Nicholson says the visit to the Dunedin campus is very important for the University, and is recognition of how far the relationship has come.

“The aim of the MOU for us is to increase the collaborations between our University and the various universities in Shanghai, and in many areas of research and teaching, this is already occurring,” says Professor Nicholson.

Some of the earliest Chinese migrants to the region were miners who were invited to Otago by the Dunedin Chamber of Commerce in 1851, he says. 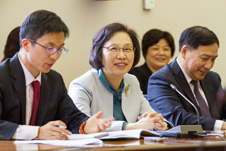 Professor Nicholson then outlined several important initiatives which show how Otago’s relationship with Chinese education and research providers has grown in recent years.

For the past six years Otago has had a student exchange programme with Fudan University in Shanghai; more than 15 exchanges have taken place since 2010. Otago also has links with Fudan – which is a top-five ranked Chinese university – via the Confucius Institute in Auckland.

Each year, since 2013, between three and 12 Otago undergraduate business students have spent their mid-year break at Shanghai University of International Business and Economics (SUIBE) on a four-week programme learning about business in China, as well as Chinese languages and culture. Students stay on campus and experience many aspects of life in China.

Professor Nicholson outlined the Otago Business School’s new Doctor of Business Administration (DBA) degree which will be taught at Shanghai Jiao Tong OEC (SJTU). The degree will be taught in Shanghai online from Otago in Chinese, with some teaching and supervision assistance from SJTU staff.

The DBA, which includes taught papers and a thesis, is pitched at students who are well established in their business careers. The first cohort of students will be in Dunedin in late November for their orientation programme and will begin study in early 2017.

“The programme is an example of true collaboration and has developed from our meetings in Shanghai,” Professor Nicholson said.

A memorandum of understanding between the two universities for the programme was signed late last year.

The recently funded NZ-China Research Collaboration Centre headed up by Professor Jim Mann focuses mainly on non-communicable diseases. The Centre had a recent visit from Maggie Chen from the NZ Consulate in Shanghai. She is helping the Centre to develop links in Shanghai and Dr Hu Zhang is following up on the visit Professor Nicholson had with Fudan Medical School and School of Public Health when he visits in the next few months. 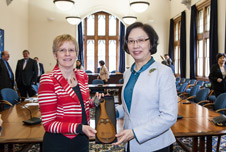 The Centre is concerned with establishing research collaborations throughout China but given the links with Fudan University which already exist, and the potential associated with the sister city relationship, there will be collaborations with researchers in Shanghai. Professor Nicholson is exploring the possibility of a launch of the Centre when another high-level delegation from Shanghai visits Dunedin in November.

Dr Miranda Mirosa, Senior Lecturer in Food Science at Otago has recently been awarded a NZ/China Postharvest Loss and Food Waste Research Fellowship, supported by the Ministry for Primary Industries (MPI) and the Ministry of Business, Innovation and Employment (MBIE).

This programme aims to enhance business-research-government partnerships through commercially meaningful research, complement existing or planned joint research programmes under the China-NZ Food Safety and Security Science Roadmap; and support the APEC Food Security and Free Trade Area Asia Pacific work. The Fellowship allows Dr Mirosa to spend time in research institutes and with partner companies in China. She will be in China and Taiwan for two months later this year conducting a project on “willingness of consumers to pay for high value sustainable (no waste) products”. 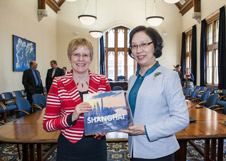 Otago colleagues and Dr Mirosa are members of the New Zealand Food Safety Science Research Centre. The Centre was launched in May 2016 as a partnership between government, industry organisations and research institutions (funded by industry and MPI/MBIE). The Otago team has funding to help lead a sub-theme on consumer risk perceptions.

“In this food safety area, I am in the early stages of relationship building with researchers at Xi-an Jiaotong-Liverpool University that have expertise in Chinese consumer insights and in running large data collection experiments which I’m really excited about.”

Dr Gavin Clark, from Research and Enterprise at Otago, says the research and development collaborations stand to create new value by combining New Zealand innovation with an outstanding critical mass of world-class Chinese expertise in research that is strongly focused on solving real-world problems.

Dunedin Mayor Dave Cull has previously said that the updated MoU with Shanghai will build on existing relationships and also have an increased focus on science, technology and innovation; sustainability and environmental protection; and creative industries and networks.