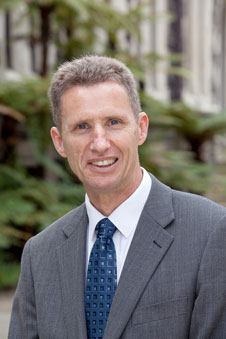 The University of Otago has selected Professor Richard Barker as the next Pro-Vice-Chancellor of its Division of Sciences. Professor Barker holds the Chair in Statistics in the Division’s Department of Mathematics and Statistics. He will take up the role for an 18-month period after Professor Keith Hunter retires at the end of this year.

Announcing the appointment Vice-Chancellor Professor Harlene Hayne says she is delighted that Professor Barker is moving into the position.

“Richard Barker is a highly experienced academic who has done much to transform his department’s research culture while also enhancing the quality of teaching and service it delivers. Additionally, his cross-disciplinary research background provides him with a strong appreciation of the importance of fostering collaboration across different areas of the University,” Professor Hayne says.

Professor Barker’s research interests include statistical theory, methods and analysis for applications in areas such as fisheries and wildlife ecology, sport science and exercise physiology and climate change.

He gained his BSc (Hons) in Zoology and later a PhD in Statistics from Massey University after spending two and a half years at the US Fish and Wildlife Research Center in Maryland.

After working as a programme leader at Landcare Research, Professor Barker joined Otago’s Department of Mathematics and Statistics in 1998. In 2007 he was appointed Professor of Statistics and was Head of Department from 2008 until early this year.

In 2013 he received the New Zealand Statistical Association’s Roger Littlejohn Research Award, which recognises excellence in research based on publications during the previous five years and has supervised or co-supervised more than a dozen master’s and PhD students.

He is Director and Chair of Hopkins Farming Group Ltd, a Manawatu-based agribusiness and a Director of Oritain Ltd, a Dunedin-based company that specialises in the origin of food using trace-element and stable-isotope technologies.

Professor Barker says he is excited by the opportunity to lead the Division of Sciences at New Zealand’s most science-intensive university.

“It is a privilege to have the chance to build on the legacy established by previous leaders of a division which is already strongly performing in research as measured by its PBRF standing but also by the quality of its teaching,” he says.

Professor Barker says he looks forward to working with Heads of Department and other leaders in the division to build on its existing strengths in the natural and physical sciences, and particularly in areas relating to health sciences.

“A key part of our strategy has to be working with Health Sciences and the other two academic divisions at Otago, which already have strong collaborative links with our division,” he says.

Professor Barker says he is also keen to ensure that the division continues to play its part in supporting Māori and Pacific aspirations and diversity more generally.

“For example, we are already noted for our outreach activities that support Māori and Pacific Island development in the STEM subjects but there is always room for further growth in this area,” he says.

The Division of Sciences is home to the departments of Botany, Chemistry, Computer Science, Food Science, Geology, Human Nutrition, Marine Science, Mathematics and Statistics, Physics, Psychology, and Zoology, and also the Centre for Materials Science and Technologies and the world-leading Centre for Science Communication. It also includes two schools: the School of Physical Education, Sport and Exercise Sciences, and the National School of Surveying.