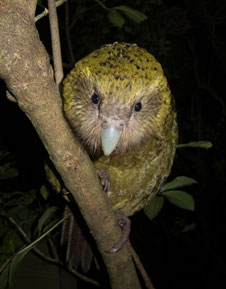 New research from the University of Otago helps explain the recent history of one of New Zealand’s most iconic parrot species and the role humans played in their decline.

In a new study published in the Journal of Heredity, Otago researchers have found that the sharp population decline of Kākāpō was associated with the colonisation of New Zealand by Europeans, not Polynesians.

Associate Professor of Zoology Dr Bruce Robertson, one of the co-authors on the study, says a decrease in population size and genetic diversity coincided with European arrival, supporting the hypothesis that the introduction of mammals such as stoats may have been the primary cause of decline.

The Kākāpō, sometimes referred to as the owl parrot, is the world’s only flightless and nocturnal parrot. Previously abundant and found throughout New Zealand, the species now numbers only 155 living individuals that are intensively managed on offshore island sanctuaries.

Laura Bergner, who undertook the research for her Masters at Otago’s Department of Zoology, Dr Nic Dussex and Dr Robertson sought to better understand the causes of population decline and to assess the loss of genetic variation in the Kākāpō.

The study compared modern day and historical Kākāpō genetic variation and used population modeling to estimate the timing and magnitude of the decline since the arrival of Polynesians to New Zealand.

“We found that population decline in Kākāpō was not associated with Polynesian arrival but with the more recent European colonisation,” says Miss Bergner.

Dr Dussex adds that while Polynesians hunted Kākāpō for food and skins, introduction of mammalian predators may have been more important in Kākāpō decline than hunting by Polynesians.

“It is possible that an earlier impact of Polynesians on Kākāpō demography may have been eclipsed by the more recent impacts of European colonisation, but examining older kakapo samples, such as those from Māori middens, is required to shed more light on any impacts of Polynesian settlement on Kākāpō,” adds Miss Bergner.

The study also has important implications for Kākāpō conservation.

Understanding the time-frame of decline is a central question in Kākāpō conservation because it can give managers clues about what forces may have been at play in the decline of the critically endangered species.

“In this case, it is likely that mammalian predators were the main culprit in the decline of Kākāpō,” says Miss Bergner.

“Our results lend support to the current strategy of maintaining predator-free offshore islands for Kākāpō to live on. Although it was previously known that Kākāpō exhibit low genetic diversity, understanding how quickly this loss occurred can also help manage what genetic diversity remains.”

“If we succeed in the ambitious plan of eradicating all introduced mammalian predators from New Zealand by 2050, historical population size estimates could give managers a target for the number of wild Kākāpō,” says Dr Robertson.

This work was supported by the University of Otago and Allan Wilson Centre funding to Bruce Robertson and the late Emeritus Professor Ian Jamieson.