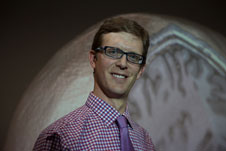 University of Otago, Christchurch, MRI expert Dr Tracy Melzer has been awarded $500,000 from the Health Research Council (HRC) to study changes in the brain that could predict dementia.

A recipient of a prestigious Sir Charles Hercus Health Research Fellowship, Dr Melzer is one of fourteen Otago health researchers and students to receive funding through the HRC career development awards for 2017. A full list appears below.

Dr Melzer is part of the New Zealand Brain Research Institute and has spent the past few years scanning and studying the brains of people with Parkinson’s disease. The disease is the second most common form of neurodegeneration, behind Alzheimer’s disease, and often can lead to dementia.

Dr Melzer says recently clinicians and scientists have acknowledged that cognitive problems associated with Parkinson’s disease can be more debilitating than physical symptoms such as tremor and slowed movements. Much international effort is now focused on developing new preventative treatments for dementia. Identifying people at highest risk of developing dementia is an essential part of this effort.

The ultimate aim of Dr Melzer’s work is to provide a better understanding of the dementia process and provide clear direction to those developing new therapies for the debilitating and widespread condition.

“If we know who is at imminent risk of developing dementia, we can target these individuals and include them in trials of new drug therapies for cognitive issues. If you can target them before they develop cognitive impairments you have a better chance of delaying the onset, or even preventing it.’’

Dr Melzer’s study will be the first to combine advanced blood flow imaging and a method to measure the accumulation of an abnormal protein, called tau, in the brain. Tau is associated with the development of Alzheimer’s disease and may play an important role in the development of dementia in Parkinson’s.

Over four years, Dr Melzer will study the brain scans of 25 healthy participants and 70 people with Parkinson’s disease who have varying levels of cognitive impairment. He will look for patterns or differences in tau build-up and blood flow between people with dementia and others.

Many people with Parkinson’s develop cognitive problems and, eventually, dementia. We need to identify suitable objective tools that measure the underlying brain changes associated with cognitive decline. Such tools are important clinically and for assessing new preventative treatments. Here, two novel brain imaging approaches will be used. First, we will measure accumulation in the brain of an abnormal protein, tau, which is associated with the development of Parkinson’s dementia. Second, we will use a new brain imaging technique to measure blood flow in the brain. Both measures will be acquired in 25 healthy control participants and 70 people with Parkinson’s disease with varying levels of cognitive impairment, including dementia, to show how tau burden and blood flow in the brain reflect degree of cognitive decline.

Impact of sugar-sweetened beverage taxation in the Pacific

Given the scale of the global obesity epidemic it is critical to understand if interventions to control obesity are effective. The primary aim of this study is to examine the impact of sugar-sweetened beverage (SSB) tax on consumption in Pacific Island Countries and Territories (PICTs). The Pacific region is an excellent site from with which to examine this topic as 13 of 22 PICTs have introduced SSB taxes. The impact of such taxes can be studied before and after using income and expenditure surveys and importation data from PICTs that do not produce SSBs. Findings from regression and panel estimation, are likely to have international implications and inform interventions to protect the health of New Zealanders. The Clinical Training Fellowship will allow Dr Teng to develop skills in time-series and economic analysis, establish a career as an epidemiologist in non-communicable disease control and contribute to strengthened New Zealand-Pacific links.

Health implications from education for Pasifika people and their families

Follow up of hip and knee arthroplasty patients returned to GP

The economic cost of diabetes among Pacific Islanders

Does sleep differ according to ethnicity in children?

Tāne in the health workforce: A students’ experience of supporting factors