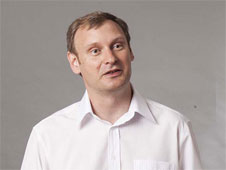 Ground-breaking theoretical work by University of Otago physics researchers showing that under certain conditions gases can form into stable droplets – as liquids do – has now been confirmed experimentally by scientists in Germany.

The latter researchers have just published their findings in the prestigious journal Nature.

Otago Department of Physics researcher Professor Blair Blakie, who led the team developing the theory, says the new ability to produce gas droplets is exciting as it opens the door to a range of potential applications.

It has been a longstanding question as to whether it is possible to make a gas self-bind in the same way that water molecules coalesce into stable droplets, he says.

In work appearing earlier this year in the journal Physical Review A, Professor Blakie’s team determined that an extremely cold gas of highly magnetic atoms will self-bind into gas droplets that stabilise themselves, even in vacuum.

Their predictions were made using quantum calculations on high performance computing facilities provided through the National e-Science Infrastructure (NeSI).

The gas needs to be prepared under very specific conditions to observe the formation of droplets, he says.

“We worked out that it had to be at a temperature of a few millionths of a degree above absolute zero, a density more than a billion times lower than liquid water (about 100,000 times lower than air), and in a suitably adjusted magnetic field.”

Under these conditions the gas will spontaneously develop into filament-shaped droplets of micrometer dimensions which persist as stable packages even after the gas is released from its container, he says.

Professor Blakie is a member of the Dodd-Walls Centre for Photonic and Quantum Technologies, a national Centre of Research Excellence involving five universities, hosted by the University of Otago.

This work was supported by a grant to Professor Blakie from the Marsden Fund of New Zealand, which supports the lead author Danny Baillie (a research fellow at Otago). The two other co-authors on the paper are Otago PhD graduate Dr Russell Bisset, who is now a postdoctoral researcher in Italy, and Professor Ryan Wilson, a collaborator at the US Naval Academy.