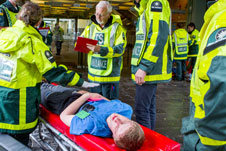 The largest scale emergency exercise ever held at the University of Otago has been incredibly successful, with more than 120 people involved and many comments about how realistic the volunteer victims made the scenarios.

Deputy Proctor Andrew Ferguson says emergency services and University staff got to test themselves in a large area and a real environment.

Part of the central campus was closed off from 9am to 4pm today for the mock emergency scenarios, along with selected areas in the 10-storey Richardson Building.

An Emergency Operations Centre was set up for the exercise in the Proctor’s Office on campus for both scenarios, one in the morning and another in the afternoon.

A total of 40 volunteers acted as victims, some with simulated injuries, to make the scenarios as realistic as possible for both the police and St John.

Mr Ferguson says the exercises provide valuable practise for not just the University, but the police and St John Ambulance staff as well.

“They all tested their responses and training on a real campus, which included St John setting up a triage station for the volunteer victims between the Science buildings, and the University testing its campus-wide Emergency Broadcast System with a test message.”

While the exercise was definitely not real, the need to prepare for emergencies is - every big organisation has to plan for potential disasters and large-scale incidents.