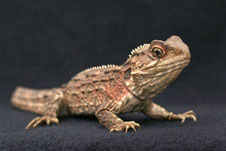 Modest tuatara numbers will be boosted at Orokonui Ecosanctuary with the release of 17 juvenile tuatara this Thursday, 15 December.

The young tuatara, aged 3-4 years, have been reared at the University of Otago. They join the population at Orokonui that was founded in 2012 when 87 adult and juvenile tuatara were released.

The tuatara have their genetic origins in the population on Stephens Island (Takapourewa) in Cook Strait, where they are recognised as a taonga and under the kaitiakitanga (guardianship) of Ngāti Koata iwi.

Kāti Huirapa Rūnaka ki Puketeraki will be present, alongside Ecosanctuary staff, Department of Conservation staff and others to warm their arrival and support any ceremonial duties.

Support for the release of more tuatara at Orokonui was made possible following positive results of monitoring last summer led by research assistant Scott Jarvie and Associate Professor Alison Cree of the University’s Department of Zoology.

“We recaptured more than half of the tuatara that had been released about three years earlier and they appeared healthy and well,” said Jarvie.

“We are delighted to be able to provide a home for these additional tuatara” said Chris Baillie, general manager of the ecosanctuary.

Orokonui is the only fenced ecosanctuary in the South Island where tuatara roam freely in the absence of predatory mammals such as cats and stoats. Until a few hundred years ago tuatara lived throughout much of the eastern South Island, but quickly disappeared following the arrival of humans and other land mammals.

“We see the establishment of a tuatara population at Orokonui as part of our commitment to help tuatara survive the challenges of climate change” says Associate Professor Cree. “Cooler, southern locations are likely to become increasingly important to tuatara as sea levels rise and conditions become hotter and perhaps drier on some northern islands.”

Members of the public who see free-roaming tuatara in the ecosanctuary are encouraged to take good-quality photographs without disturbing the reptiles and to show these to Orokonui staff or University researchers. Idiosyncracies of the spines or other body markings may enable individual tuatara to be identified.

Tuatara, known to scientists as Sphenodon punctatus, are the world’s only surviving rhynchocephalian reptiles. Rhynchocephalians or beak-headed reptiles were common about 200 million years ago. Tuatara are the closest living relatives of lizards and snakes, although their common ancestry is distant in time.

Like many other New Zealand reptiles, tuatara have “slow” life histories. Their eggs take about a year or more to incubate in the ground, hatchlings take about 15 years to reach maturity and females typically produce only about nine eggs every 2-5 years. The life span of a wild tuatara can reach about a hundred years.

Tuatara once lived on the North and South Islands, but became extinct there and on many offshore islands following the arrival of humans. Today they survive naturally on about 32 islands in Cook Strait and off the North Island coast. Since 1995, tuatara have been reintroduced to at least nine islands and four North Island sanctuaries, in addition to Orokonui.