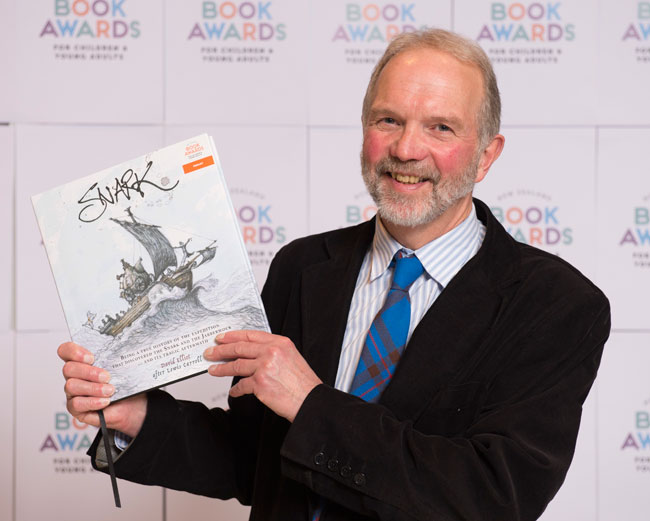 Dunedin author and illustrator David Elliot has won both the Margaret Mahy Book of the Year Award, and the Russell Clark Award for Illustration, at the 2017 New Zealand Book Awards for Children and Young Adults.

His book Snark: Being a true history of the expedition that discovered the Snark and the Jabberwock . . . and its tragic aftermath, published by Otago University Press, was announced the winner at the awards ceremony on Monday evening in Wellington.

Snark is a tumultuous romp through worlds created by Lewis Carroll, brought to life through the vivid imaginings and fabulous art of its award-winning author and illustrator David Elliot.

The judges’ report acclaimed Snark as a ‘dynamic piece of work which will have value many years from now’ that offered ‘everything the reader could want – mystery, adventure and intrigue, all spectacularly wrapped up in a creative package that will enthral the whole family.’

The report described David Elliot’s draughtsmanship as outstanding, and said the cohesive way he combined all the elements of the book was what won the judges over.

Elliot says he was pleased and surprised that his ‘genre bending’ book had won out against a ‘strong field of wonderful children’s books’.

Otago University Press Publisher Rachel Scott says the book is a unique creation from one of New Zealand’s leading children’s authors and illustrators, and the awards are an exciting achievement for the Press and Dunedin, a UNESCO City of Literature.

David Elliot is based in Port Chalmers, Dunedin. He has won many awards for his work, including New Zealand Post Children’s Book of the Year in 2011 (with Margaret Mahy) for The Moon & Farmer McPhee. Pigtails the Pirate won Best Picture Book in the 2003 awards.

Snark is available at all good booksellers and online.

Buy Snark from the the Otago University Press