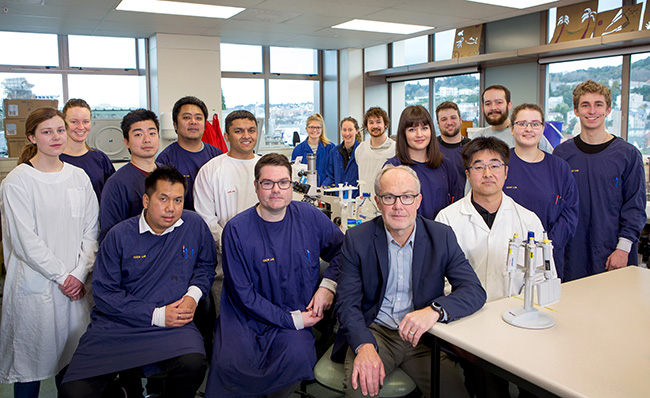 A world-leading team of microbiologists, whose work on a novel new way to fight TB infections shows great promise, has been selected as the recipient of the University of Otago’s latest Research Group Award.

The prestigious award, which goes to a research group led by Professor Greg Cook, recognises outstanding research performance at a high international level at the University, where a team effort has led to the recognised contributions.

Professor Cook’s group’s research has more than met the criteria of enhancing the understanding, development and well-being of individuals and society including the discovery and dissemination of new knowledge, the development of innovative technology, or the development of concepts that lead to significant advances.

He leads the Bacterial Energetics and Antimicrobial Resistance Group, which is making important new advances in the war against diseases such as TB, including the drug-resistant strains of its causative bacterium, and other pathogens against which existing drugs are proving increasingly ineffective.

As well as his group’s work towards developing a revolutionary class of antibiotics aimed at crippling the metabolism of such TB and other bacteria, and side-stepping existing bacterial drug-resistance mechanisms, members are also making important progress in applying the approach for agricultural applications.

This work includes discovering new inhibitors for managing mastitis in dairy herds and greenhouse gas emissions from ruminant livestock and from soils.

The group is made up of 22 researchers. Between 2012 and 2016 its members published 67 peer-reviewed publications in high-quality international publications and received significant funding from the Health Research Council of New Zealand, the Marsden Fund, MBIE, the Royal Society and the NZ Fund for Global Partnerships in Livestock Emissions Research.

Deputy Vice-Chancellor (Research & Enterprise) Professor Richard Blaikie says he is delighted that the University is able to honour the stellar research that Professor Cook’s team has undertaken and continues to pursue.

“This is world-class science that has drawn considerable attention from leading researchers around the world, with whom they have formed a number of key collaborations. Some of their work is already being translated into real-world applications such as developing new diagnostics for TB in South East Asia and working closely with pharmaceutical and agricultural industries in New Zealand and overseas.”

Professor Cook says the award is a great honour for the group and reflects of all the hard work put in over a long period of time.

“Consistency has been the key driver for this group and achieving on the international stage across a wide range of multidisciplinary research projects.

“I would like to acknowledge the Department of Microbiology and Immunology and the Otago Biomedical Sciences School for providing such a supportive environment that has allowed our team to flourish. It would be unfair to acknowledge any particular individuals because everyone in the team has contributed, and that includes many of the support staff across the Department.”

Professor Cook’s group will be supported to hold a one-day symposium to showcase their research and the Research Group Award will be presented at the symposium later in the year.