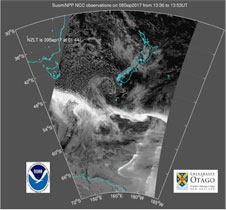 Physicists at the University of Otago and Victoria University of Wellington suggest geomagnetic storms can cause corrosion in New Zealand’s pipelines, and some areas, including Northland, are more vulnerable.

Victoria’s Dr Malcolm Ingham and Otago’s Professor Craig Rodger are mid-way through a Government-funded research project that focuses on reducing the damage to electrical networks from currents induced in the ground by large geomagnetic storms.

“We're really vulnerable to these as we've become more and more technologically dependent. It can affect not only our power network, but also things like satellite communications.”

However, Dr Ingham points out that because of the process of electromagnetic induction, currents induced in the Earth can also impact pipelines.

“However, more than 20 years ago, we carried out research that showed that the currents induced by geomagnetic activity cause the voltage of the ground to vary such that at times the pipe voltage becomes positive relative to the ground.

“This means that if you've got a hole in a pipeline cladding, variations in the geomagnetic field will cause corrosion over time, leading to containment failure and leakage.”

New Zealand’s geography controls the location and size of electrical currents in the ground, he adds.

“Induced currents are typically larger in directions perpendicular to the coastline. Auckland and Northland are therefore especially vulnerable to such variations, because of the narrow make-up of the land.”

Dr Ingham says last month’s damaged fuel pipeline in Northland is probably an example of how pipelines can be affected by geomagnetic storms if the pipe cladding is damaged.

“If a digger has previously, even years ago, scraped the coating of that pipeline, each geomagnetic storm since could have caused a little bit more corrosion and eventually it would give. That event also happened a few days after there was a big geomagnetic storm.

“To me, the effects of geomagnetic storms is something that should be considered when investigating the cause of the incident.”

More research needs to be done into how to mitigate corrosion to pipelines due to changes in the geomagnetic field, the researchers say.

Professor Rodger leads the Otago Space Weather research group and the Government-funded joint project into the potential damaging effects of “solar tsunamis” on the nation’s electrical network. He says that pipeline corrosion is indeed another infrastructure impact that deserves careful investigation.

“While solar disturbances may create auroras beautiful to behold, the flip-side is that such awesome spectacles involve mind-numbingly amounts of energy suddenly flooding our geomagnetic field. Those changes could potentially play havoc with the technologies we are increasing reliant upon.”