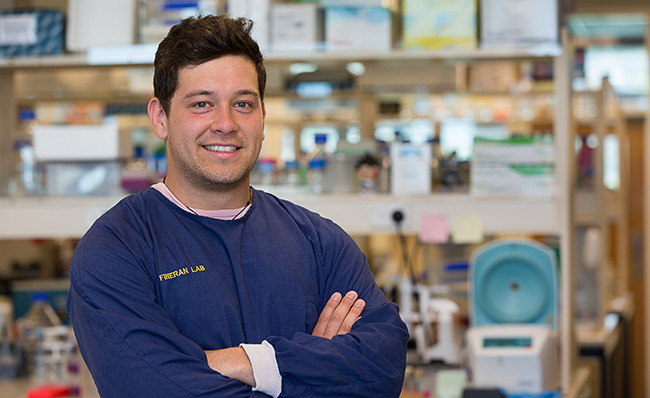 PhD student Howard Maxwell has been awarded a prestigious scholarship as part of the 2017 Health Research Council awards.

A University of Otago PhD student is doing his bit to curb antibiotic resistance and subsequently reduce the threat of infectious disease among Māori communities.

See the full list of University of Otago researchers who have received one of these awards.

His research is centred around microbiology and his passion lies in limiting and reducing the spread of antibiotic resistance – one of the fastest growing health crises in the world.

“Resistance mechanisms have been observed for nearly every antibiotic in our arsenal,” says Maxwell, who adds “we are rapidly approaching a post-antibiotic era where no treatment will exist against seemingly insignificant infections”.

Māori, he says, will be particularly vulnerable if this happens, due to both increased susceptibility to infectious organisms and reliance on antibiotics.

The Ministry of Health has acknowledged that Māori are disproportionately burdened by infectious diseases and that antibiotics are dispensed to a higher proportion ofMāori than non-Māori, says Maxwell.

“Preventing the spread of antibiotic resistance will reduce the threat of infectious disease in Māori and result in better health outcomes,” he says.

Maxwell plans to examine the communication processes within bacteria that control the spread of antibiotic resistance genes. He’s particularly interested in quorum sensing (a mechanism by which bacteria communicate) and its relationship to CRISPR-Cas systems (a way in which bacteria arm themselves against invading genetic material).

Before anyone can begin to manipulate these systems, he says, it’s important to understand how their components coordinate and communicate with one another.

It’s a task that’s keeping researchers around the globe busy, and Maxwell is thrilled to be joining their ranks. “CRISPR-Cas is a rapidly developing field and various international groups and companies are already researching its potential for curing genetic disorders,” he says.

Maxwell was first introduced into the research environment last summer, where he conducted a short research project within the Fineran Laboratory at the University of Otago. The $129,900 grant from the HRC will help him build on that work and build his research expertise.

He says his motivation comes partly from being born and raised in the small town of Opotiki in the eastern Bay of Plenty, where his predominantly Māori community is over-represented in poverty and poor health.

He also feels that addressing health issues for Māori requires a diverse approach that not only incorporates public health initiatives, but is partnered by the investigation of fundamental biology.

“I’m both curious and excited in the way that organisms function and interact with each other, people and the environment. This grant is giving me the opportunity to pursue that passion.

“It’s also a good thing for my community – I don’t think many people from Opotiki get this sort of opportunity – I’d like to be one of many to pursue postgraduate education and academia as a way to benefit our community,” he says.

The HRC’s senior manager of Māori Health Research Investment, Stacey Pene, says it’s encouraging to see young researchers driven by the need to benefit their communities and all New Zealanders, especially in areas of rising urgency such as antibiotic resistance.