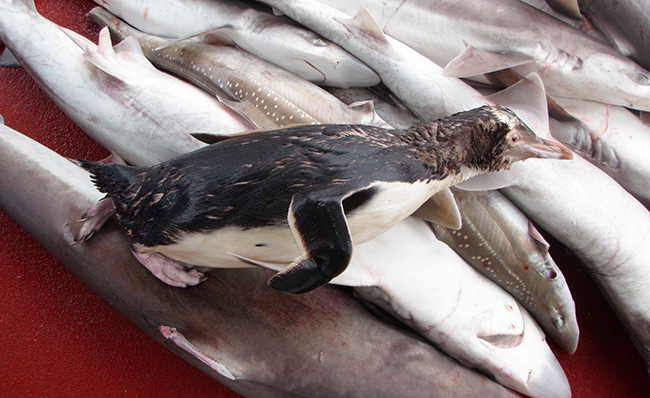 Yellow-eyed penguin that died as bycatch in a net set for school shark and rig attached. Photo: supplied.

A new review whose authors include University of Otago scientists highlights the serious risk fishing nets pose to the survival of New Zealand’s iconic hoiho/yellow-eyed penguin, and calls for urgent Government action to improve the species’ chances of survival.

In findings published in the scientific journal Endangered Species Research, the international team of researchers has produced the first global review of penguin bycatch, which identifies the endangered yellow-eyed penguin as one of three penguin species of significant concern.

Set nets - walls of fine nylon mesh used to catch fish by the gills – are used by around 330 commercial boats in New Zealand waters, and they are also used by recreational fishers.

“Diving birds like penguins are unable to see the fine mesh underwater, and become entangled and drown,” says Dr Ellenberg.

She adds: “In the past 20 years, yellow-eyed penguins have declined by 76 per cent at previous population strongholds. We have reached the point where every bird counts.”

“Penguins are seabirds, conservation measures on land alone will not save them from extinction,” says Dr Ellenberg.

“It’s the threats at sea we are most concerned about.

“Whereas there is no quick fix for climate change or marine habitat degradation, there is one thing we can do immediately to improve their chances of survival. We can stop drowning them in set nets.”

Researchers link the low numbers of reported yellow-eyed penguin deaths to the low observer coverage (less than 3 per cent of boats). Based on the limited observer data, one recent study estimates that set nets kill an average of 35 yellow-eyed penguins each year.

“Preventing their deaths in set net fisheries is a major priority in saving this species from extinction.

“The Ministry for Primary Industries have previously assessed the risk from fisheries bycatch to mainland yellow-eyed penguins as high. Yet so far they have failed to act to protect penguins, or threatened marine mammals from commercial fishing,” says Ms Baird.

The review recommends a number of actions to tackle the problem, including the presence of fisheries observers or video monitoring on vessels to monitor bycatch, and managing set net fisheries in important penguin foraging areas to reduce bycatch deaths.

“We welcome the proposed introduction of video surveillance on fishing boats as an important step in monitoring and reducing bycatch. But for the yellow-eyed penguin, the situation is so urgent that we also need to immediately establish set net closures in important yellow-eyed penguin foraging areas,” says Ms Baird.

Dr Ellenberg says temporal/spatial management of set netting would benefit other penguin species and marine mammals such as Hector’s dolphins.

"The aim of such management is to make sure that nets are not set in areas that are important foraging hotspots for threatened species. Setting the nets at night can considerably reduce the bycatch of penguins since these are visual hunters and mostly forage during daylight hours.

"We are losing yellow-eyed penguins across their entire breeding range. Breeding areas which I remember as buzzing and noisy with penguin life during my PhD research 10 years ago have now become silent and overgrown with only the odd pair hanging on.

"In recent years you observe more and more loners on empty nest bowls, penguins that wait and call for their partners which have been lost at sea and will never return. It's really disheartening.

“MPI needs to act urgently and work with the fishing industry to tackle this problem, before we lose yellow-eyed penguins from the mainland altogether,” she says.

The article 'Tangled and drowned: A global review of penguin bycatch in fisheries' has just been published in the scientific journal Endangered Species Research. http://www.int-res.com/prepress/n00869.html
Director of Wildlife Management at the University of Otago, Professor Phil Seddon, and Otago Department of Zoology honorary research fellow Dr Thomas Mattern, also contributed to the article.

The review shows the level of bycatch is of greatest concern for three species: Yellow-eyed penguins, and Humboldt and Magellanic Penguins, both found in South America.