A strikingly intricate portrait of a young Māori chief is making its way home after being acquired by the University of Otago’s Hocken Collections, Uare Taoka o Hākena.

The purchase of Atay, Chief of Otargo, New Zealand, made with the blessing of local rūnanga, is a real coup for the Hocken. 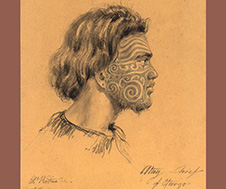 The portrait of Atay, Chief of Otargo, New Zealand by artist Charles Rodius.

The incredibly detailed and engaging portrait was drawn in 1835 by German-born artist Charles Rodius.

"It is so well drawn, the young man’s personality leaps from the page. There is nothing like it in our collection.’’

Funds for the purchase came from the library’s endowment trust, which Ms Dell says is carefully managed and used judiciously.

"Thanks to the generosity of past benefactors, we have trust funds that allow us to act in these exceptional cases to make sure materials so important to our community are secured.

"The endowment trust is the only funding we have for the purchase of manuscripts and archives, artworks and photographs so we are incredibly thankful to the people who have made donations in the past and continue to leave bequests to the Hocken,’’

After being passed by descent to a private Melbourne collection, the Hocken bought it at an auction in Auckland last week.

University Director of Māori Development Tuari Potiki is pleased that the piece will be coming back to Otago and that its preservation and protection is now ensured. He looks forward to the artwork being shared with the community.

Local Ngāi Tahu and the Hocken intend to work together to discover who ‘Atay’ is and what became of him.

The auction house, Mossgreen Webb, describes the piece as remarkable in how it conveys the dignity and self-worth of the subject.

The true identity of ‘Atay’ is unknown, but Rodius’ drawing shows the character of his subject by the strength of his gaze and jut of his jaw. A full moko, which has been recorded with care and respect, on such a youthful chief suggests he was well known.

What makes the portrait even more significant is that it depicts a young Māori chief in the years before the Treaty of Waitangi was signed.

After studying in Paris, Rodius was deported to New South Wales in 1829 for allegedly stealing items from a woman’s handbag. However, his artistic talent made him useful to the Department of Public Works, which granted him an exemption in 1832. He was then free to make a living painting and drawing portraits.

This work was drawn in Sydney at a time when there were a number of Māori in the city and a stream of people moving between New Zealand and Australia on trading vessels.

Rodius drew several other Māori around the same time and identified them with the phonetic spelling of their names.

Despite a lot of recent emphasis on contemporary work, especially around the Frances Hodgkins Fellowship 50th anniversary, Ms Dell says the Hocken is still developing its historical collections and the piece is a remarkable addition.