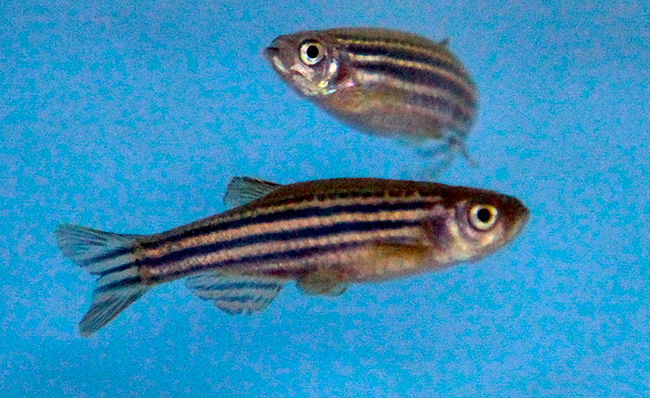 Quality sperm, good genes, and courtship knowledge are just a few reasons why females might benefit from mating with older males.

In a study of zebrafish, just published in the prestigious Royal Society journal Proceedings B, Dr Sheri Johnson and University of Otago colleagues have shown for the first time that older males may indeed be contributing good genes to offspring, perhaps counteracting the decline in fertility they experience as they age.

They used both cross-sectional and longitudinal methods to investigate the impact of male age on mating success, fertility (such as sperm production and motility), and offspring fitness (such as embryonic development, hatching and survival).

The researchers, funded by a Marsden Fast-start grant, sampled the zebrafish every three months and identified a significant decline in sperm production, sperm swimming speed and total sperm motility as they aged.

But, unexpectedly, they found that older males continued to produce offspring with high hatching rates and very high survival rates.

Lead author Dr Sheri Johnson, of the Department of Zoology, says: “One of the big paradoxes in evolutionary biology is why so many females mate with older males, when male fertility should decline with age.

“No one had ever taken the combined approach to look at mating behaviour, sperm traits, and offspring fitness as males age and very few have used longitudinal studies.

“The big surprise here is that our work suggests the genetic quality of sperm is not being compromised with age and that older males may deliver good genes.

“What we think is happening is that improvements in offspring fitness may compensate for declining fertility in older males, so females can still benefit from mating with older males and may even secure 'good genes' benefits.’’

When males were very young (4-7 months of age, roughly young adults in human terms) they produced offspring with poorer development and there was also a trend towards lower mating success. Researchers believe this could be due to their smaller size, or their lack of knowledge in courting females.

“Our findings mirror what is observed in human studies, where sperm traits decline with age. The fact that the genetic quality of the sperm of older males does not appear to compromise early offspring fitness is also important as there is a lot of controversy over male age and fertility and offspring fitness in humans,’’ she says.