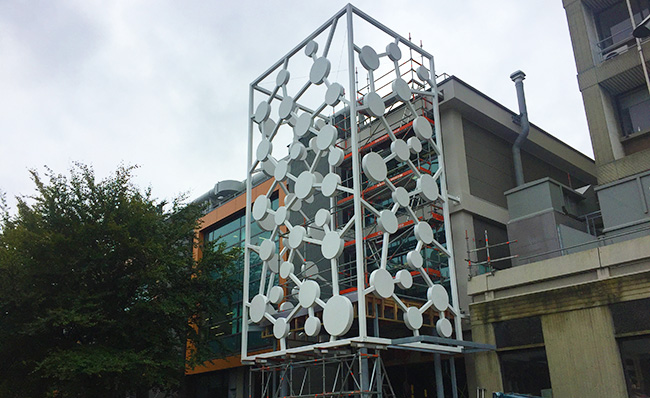 The 12.5 tonne molecular network entrance towers over the entrance to the Division of Sciences. Photo: supplied.

A 12.5 tonne, three-storey tall steel representation of a molecular network has become the “gateway” to the University of Otago’s Division of Sciences.

The $56m extensive redevelopment of the University’s Science 1 building has included linking it to the Science 2 building with an atrium and the three-sided network structure was added to the entrance of that atrium last weekend.

“It is wonderful the project has provided this chemical ‘bling,’ immediate past-Head of the Department of Chemistry, Professor Lyall Hanton, says.

The atrium is also not only a thoroughfare but an excellent gathering and social space, he says.

The steel abstract representation of a molecular network was designed by the project’s architect Parker Warburton Team Architects director Simon Parker and the project’s structural engineering consultants Calibre, both of Dunedin.

Mr Parker says the network is intentionally abstract because the building houses research and teaching from many different branches of chemistry.

The molecular theme is repeated at the western end of the building – facing southbound State Highway One – with a new, lit-up molecule structure of Laurenene, which was discovered by Otago PhD chemistry student Denis Lauren in 1970.

Laurenene is an extraction from the rimu tree and has a unique chemical structure: four rings sharing a central carbon atom. Lights in the lobby also have a molecular theme.

The manager of Zeal Steel fabricators, Lawrie Forbes, says the new molecular structure at the eastern end of the building took about four months to create.

While the frame is made from two different sizes of box section steel (square hollow sections of steel), the molecular nodes are created from two circular discs of 6mm steel plate held together by a circular band of steel.

The three different sizes of metalwork creates a sculptural look to the pieces and gives the nodes – which are bigger than the box section – real presence, he says.

Steel, zinc and an electric current

Precision Profile’s Lee Berry says his Dunedin firm used a computer-controlled high-definition plasma cutter to cut out the molecular network design, then staff manoeuvred magnets and hooks to carefully extract the cut steel from the leftover surrounding steel plate, to ensure the molecular network did bend or lose its shape.

Zeal Steel put all the steel components together for each of the three pieces, then they were transported as a wide load to ABS Sandblasting and Spray Painting, in Burnside, for abrasive blasting and metal arc spraying.

ABS Manager Michael Hannagan says that involved feeding a zinc coil into a spray gun – similar to a large MIG welder – and shooting it across a high electric current arc so the coating almost became part of the parent metal.

Mr Forbes says that to confirm the coating would withstand the elements, a sample was made in March 2016 and kept outside.

The structures were painted white before being installed.

Weeks before the installation, the installers assembled the three-sided network off-site on the ground to make sure all the connections fitted together smoothly, and had extensive discussions with the crane operator to fine-tune the installation methods, Mr Forbes says.

Tonnes of crane and molecules

University of Otago Campus Development Director David Perry says all three pieces of the new gateway to the Division of Sciences were lifted into place and slotted together during the weekend, by a 70 tonne crane.

The Union Place entrance to the campus was closed at the time, as a safety precaution.

The installation signals the approach of the finish of the second phase of the Science 1 redevelopment project by Leigh’s Construction. Some specialist components for the trace elements lab are to arrive in April, which will mark the completion of the project.

Floor-by-floor the second phase of the project – at the eastern end of the building – has involved:
Ground floor
• A “super-lab” for 112 students, which has iPads at each lab station and contains the latest scientific equipment
• A breakout space, which includes 232 student lockers, each with a USB port for charging phones, a power socket and LED lighting. Students can swipe their student ID cards at the locker terminal to be allocated a free locker. When they remove their belongings, the locker can be reassigned.

• Environmental and chemical oceanography research laboratories designed for the specialist research undertaken by a team recognised as the best Chemical Oceanographic group in the world. This team received the Prime Minister’s Science prize in 2011.
• A trace elements lab
• A postgraduate write-up area
• Meeting rooms
• Offices

The first phase of the Science I building redevelopment – at the western end of the building – was completed and named the Mellor Laboratories early last year. That phase involved:

Ground floor:
• Another “super-lab” for 112 first-year students, which can be divided in two, has iPads at each lab station and the latest scientific equipment
• A small chemistry outreach laboratory
• Offices for Teaching Fellows

Aspects of the building – including lighting – can be controlled from off-site, using smart technology, Mr Perry says.