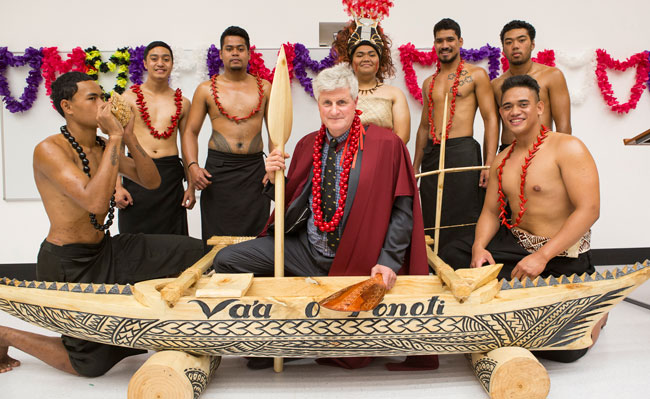 Members of the Pacific community presented Pro-Vice-Chancellor Health Sciences, Peter Crampton, with a traditional va’a (waka) at a welcoming function for Pacific Island students into the Division of Health Sciences on Friday. Photo: Sharron Bennett.

The University of Otago continues to lead the way in education for Pacific peoples with the development of Va’a o Tautai, the Pacific entity within the Division of Health Sciences.

Va’a o Tautai provides strategic leadership within the division bringing together the Office of the Associate Dean (Pacific), the Pacific Islands Research and Student Support Unit and a new centre for research and teaching, the Centre for Pacific Health.

This year’s official welcome for Pacific students in the Division of Health Sciences last Friday, 23 February, was significant in that it incorporated the formal introduction of Va’a o Tautai and the cultural acknowledgment for a number of staff who are retiring who have contributed significantly to Pacific developments.

Faumuina Associate Professor Fa’afetai Sopoaga says the University of Otago is leading the way in Pacific education among New Zealand universities. For example, Pro-Vice-Chancellor Health Sciences, Professor Peter Crampton, strongly supported development of an inaugural Pacific Strategic Framework (2011-2015) for the division and this has since been replaced by a University-wide Pacific framework (2013-2020).

Associate Professor Sopoaga was appointed to her role in 2009 and established the Pacific Islands Research and Student Support Unit in 2010. Following her appointment, new Associate Dean (Pacific) roles were established at the Wellington and Christchurch campuses and in the Dunedin School of Medicine. Other similar roles have since been established University-wide.

“I’m very proud of this University and its visionary leaders.”

“To come to this prestigious University with its proud history, yet one which has also adopted a social accountability agenda that is inclusive of everyone who wants to come here, is wonderful.”

The immersion programme for fourth year medical students at the Dunedin Campus, whereby they spend a weekend living with a Pacific family, is now compulsory and will be rolled out in Christchurch this year, with discussions underway for the Wellington campus next year.

“It’s about training health professional students to integrate clinical and cultural competencies in a way that translates to positive outcomes for their patients,” Associate Professor Sopoaga says.

Professor Crampton, who is later this year stepping down from his role, was formally recognised by the Pacific community at Friday’s ceremony, with the presentation of a traditional va’a (waka), symbolising the Pacific journey he has enabled in the Division of Health Sciences.

A team of three traditional master carvers from Samoa was brought to Dunedin for three weeks by Va’a o Tautai to build a double hulled waka, with one presented to Professor Crampton and his family, and the other to remain at Va’a o Tautai’s offices.

Professor Crampton told those gathered on Friday that it was “an incredibly humbling experience” to be presented with such a “remarkable, beautiful and unique gift”.

While stepping down from his current roles later this year, Professor Crampton says he will continue working at the University and is committed to working with his Pacific colleagues in the future.

Associate Professors Pat Cragg, David Perez and Jonathan Leichter, who are retiring this year, were also acknowledged for their excellent services to Pacific students, staff and communities.

Associate Professor Sopoaga is excited to be part of the Pacific journey in the Division of Health Sciences. “It’s a journey into unchartered waters,” she says.