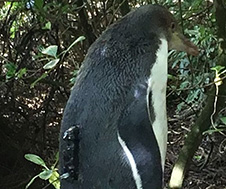 A yellow-eyed penguin chick with a satellite tag attached to its lower back. Photo: Jessica Abt.

A select group of this season’s yellow-eyed penguin/hoiho chicks are having their first expeditions into the ocean remotely tracked, as University of Otago researchers investigate dramatically declining survival rates of the endangered species.

Improvements in tracking technology has made the research possible, with transmitters now small enough to fit on yellow-eyed penguins.

Each of the 23 penguins involved in the study is equipped with a satellite tag, transmitting messages to overhead satellites, which triangulate the penguin’s position on the ocean’s surface. Some of the devices are able to send stored GPS positions by text message every two days. The tags are attached to the bird’s lower back using cloth tape under a small patch of feathers, and are secured with cable ties. 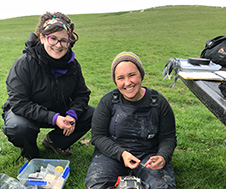 For Zoology PhD candidate Mel Young, this research has been a long time coming. Ms Young has been involved with yellow-eyed penguin conservation and research for over 13 years, and is anxiously watching this season’s cohort of chicks as they transition to independence.

“We’ve seen a large decline in the number of young birds surviving to adulthood, and as a result the number of recruits has halved over a 70-year period,” says Ms Young.

Ornithologist Lance Richdale studied yellow-eyed penguins from 1936 to 1952, recording survival of penguins up to one year of age (juveniles) at 32%, and subsequent recruitment to breed as adults at 26%.

Recent research by the University of Otago indicates a decline in both juvenile survival (to 20%) and recruitment to breed (to 12%).

“The current recruitment rate is unsustainable. Breeding adults need to be replaced. We need to find out which factors are shaping juvenile survival of yellow-eyed penguins at this critical life stage,” Ms Young says.

Associate Professor Yolanda van Heezik of the University’s Department of Zoology says “it’s only in recent years that tracking technology has become small enough that we can safely carry out this kind of study – it has been very exciting seeing just where these young birds go”.

Penguin tracking is expensive. Grants and donations were used to buy 20 satellite tags for this season’s research, with last season’s pilot study being funded by the Conservation Services Programme, Department of Conservation.

China Travel Services, The Antarctic Research Trust, Birds New Zealand, Save the Otago Peninsula Incorporated Society, and the South Otago and Southland branches of Forest and Bird contributed to funding this season’s satellite tags. The research is a collaboration with the Department of Conservation.

At this stage, 15 of 23 penguins have moved away from the areas in which they were hatched, heading north up the east coast of the South Island. One Catlins penguin, known as Takaraha, has travelled over 470 kilometres. Over the weekend, Takaraha rounded Banks Peninsula, and latest data shows Takaraha 10 nautical miles east of Gore Bay.

Professor Phil Seddon of Otago’s Department of Zoology says people on or around the coast can play an important part in the research.

“We hope members of the public can assist us in this research by reporting any sightings of a penguin with a tracker on. It’s important that people don’t try to approach any penguins however, but rather just leave them alone, and contact us,” Professor Seddon says.

“Survival rates in the first year of a yellow-eyed penguin’s life are very low. It is vital to determine where they go during that period in order to do what we can to improve their chances. There is quite some urgency, as we are facing the loss of the species from the New Zealand mainland in the next few decades,” Dr Mattern says.

Though the situation is concerning, Ms Young feels optimistic about the yellow-eyed penguins’ future.

“We can use the data from satellite tracking to improve our understanding of important foraging areas and influence the management of regional threats to juvenile survival at these locations. Stopping the decline of yellow-eyed penguins relies on evidence-based decision-making, and the University of Otago is doing its part to gather that evidence.” 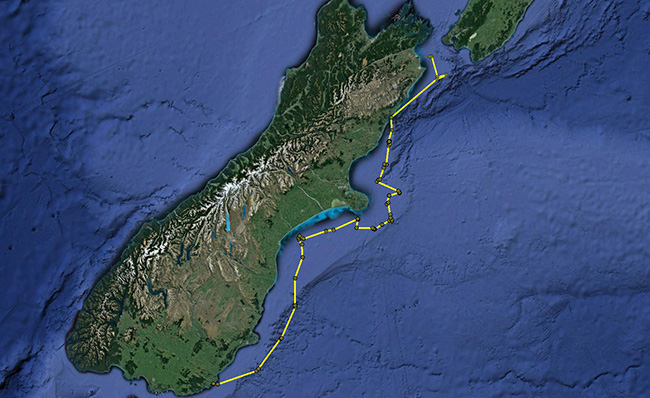 An updated map of Takaraha's travels through the South Island.

A plotted map updating the progress of Takaraha shows the juvenile yellow eyed penguin in Cook Strait as of last night.

The course even suggests Takaraha showed interest in crossing the strait, before doubling back and heading towards the top of the South Island.

Takaraha is one of 23 yellow eyed penguins to be fitted with a transmitter by University of Otago researchers, in an effort to learn more about concerning survival rates of the birds – particularly in young birds.

Zoology PhD candidate Mel Young says that as of last night Takaraha’s position is 11 nautical miles due east of the Wairau River Mouth, near Blenheim.

Total path distance according to the satellite tag = 954km.

“21 birds have now fledged, two devices are yet to go out, and three birds have already gone offline. This could be due to either pulling the device off, the device has failed, they've been eaten by something, or they've succumbed to starvation, or they've died from other causes,” Miss Young says.

The satellite tag for Takaraha was bought out of donations from the South Otago Forest and Bird branch, who grew and sold native plants in Balclutha to raise the money.