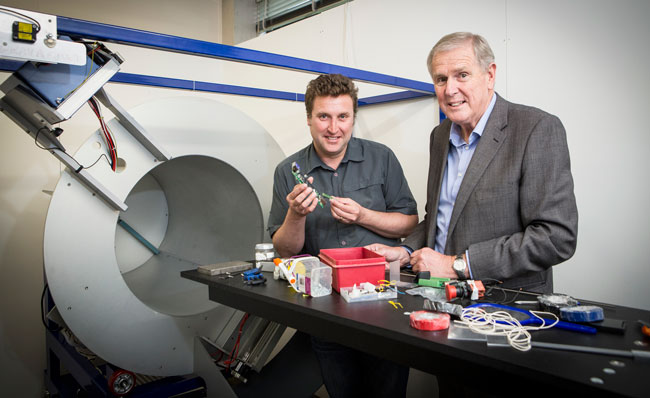 The first human has been scanned with a revolutionary new 3D colour medical scanner invented in New Zealand by father and son scientists from the Universities of Canterbury and Otago.

The MARS spectral x-ray scanner will revolutionise medical imaging globally – and as a result the diagnosis and treatment of diseases such as cancer and heart disease - because it provides far greater detail of the body’s chemical components.

In the next few months, Christchurch orthopaedic and rheumatology patients will be scanned by the machine in a world-first clinical trial.

Father and son scientists Professors Phil and Anthony Butler invented the MARS spectral x-ray scanner. Professor Phil Butler is a physicist working at the University of Canterbury. His son Anthony is a radiologist and Professor at both the Universities of Otago and Canterbury.

The Butlers adapted technology used by the European Organization for Nuclear Research (CERN) in the hunt for the ‘God particle’ into a medical scanner.

The MARS CT scanner produces images with significantly improved diagnostic information. It measures the x-ray spectrum to produce colour images instead of black-and-white ones, and shows different components of body parts such as fat, water, calcium, and disease markers.

Small versions of the scanner that can house tissue samples are already in use in research institutions around the world. The first human has now been scanned through a larger form of the scanner. Professor Phil Butler was the first person to be scanned. His ankle and wrist were imaged.

The next step in development is an imminent clinical trial where orthopaedic and rheumatology patients from Christchurch will be scanned. This will allow the MARS team to compare the images produced by their scanner with the technology currently used in New Zealand hospitals.

The Butlers and their growing team of scientists have been supported over the past decade of developing the machine by the Universities of Otago and Canterbury; the Ministry of Business, Innovation and Employment; and GE Healthcare. MARS Bioimaging Ltd (MBI) has commercialised the product.

Professor Anthony Butler says after a decade in development it is really exciting to have reached a point where it’s clear the technology could be used for routine patient care.

“X-ray spectral information allows health professionals to measure the different components of body parts such as fat, water, calcium, and disease markers. Traditional black-and-white x-rays only allow measurement of the density and shape of an object,” Professor Anthony Butler says.

“So far researchers have been using a small version of the MARS scanner to study cancer, bone and joint health, and vascular diseases that cause heart attacks and strokes. In all of these studies, promising early results suggest that when spectral imaging is routinely used in clinics it will enable more accurate diagnosis and personalisation of treatment.”

Professor Butler says CERN’s Medipix3 technology sets the machine apart diagnostically because its small pixels and accurate energy resolution mean it can get images no other imaging tool can.

“As a new imaging device, a new microscope if you like, biomedical researchers can non-invasively see different kinds of detail inside patients,” he says.

Get more technical and clinical information about the MARS scanner. 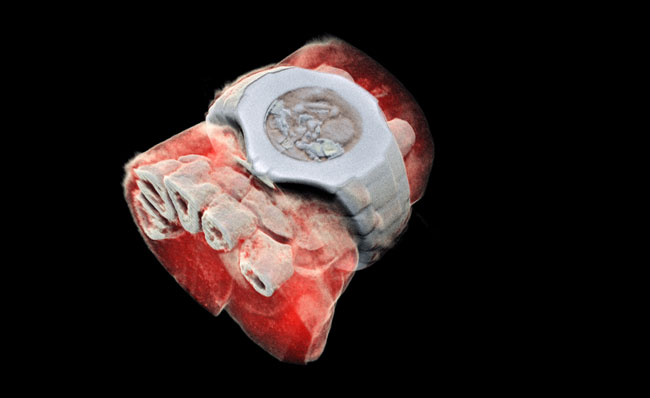