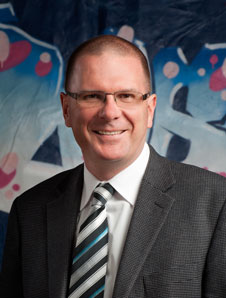 Professor Robertson and his team at the Clinical Genetics Group are considered global experts in studying single gene disorders in children, with a particular emphasis on disorders that affect the development of the skeleton and the brain.

Recently the paediatric geneticist had a research paper published in the American Journal of Human Genetics, describing his team’s discovery of the cause of a rare condition that results in the fusion of bones in the spine and limbs.

DNA samples from 16 children from all corners of the globe were shipped to Professor Robertson’s laboratory at the Otago Medical School, because he has a reputation as being an expert in this particular group of conditions globally.

They used genome sequencing to find the culpable gene mutated in the disorder, Recessive Spondylocarpotarsal Synostosis Syndrome, and for the first time identified that there was more than one gene implicated in the cause of the disorder.

“In this work we seek to identify precisely what the genetic factors are that are driving this condition to have this ominous outcome; by discovering the gene which is responsible we open up a lot of options – both diagnostic and perhaps even therapeutic, to help these families,” Professor Robertson explains.

In other research, published in the journal PLoS Genetics in May, Professor Robertson’s research team took part in a worldwide collaboration using new genome sequencing technologies which found a new gene for a rare neurological disorder characterised by malformations of specific structures in the brain.

The condition is called periventricular nodular heterotopia and because of abnormal neuron positions in the brain, individuals can develop epilepsy and/or intellectual disability.

The Dunedin-based team sequenced 65 separate families with this conditition and then pooled their data and results with a wider international team to make the new finding after analysing more than 200 families with the condition. It involved clinical and molecular geneticists from all over New Zealand, Australia, Europe and the United States.

Professor Robertson says the power of this study lay in the ability to collaborate closely with international colleagues and lend expertise to the combined effort.

“All of this activity illustrates that so called genomically-informed medicine has arrived and can lead to more accurate, earlier and more efficient diagnoses for children, especially,” Professor Robertson explains.

“We are using this technique extensively in my lab and diagnosing many New Zealand children with genetic diseases under our research protocol.

“Our work shows that no only can we do it here, but do it really well and even find the causes for new conditions.”

Professor Robertson is supported in his work at the University of Otago by New Zealand’s leading charitable funder of child health research, Cure Kids.

Fifteen years ago Cure Kids provided Professor Robertson with certainty of long-term funding for his research and over time he has used the support of their donors to establish a specialist laboratory that is pioneering the study of the genetic determinants of an increasing number of rare disorders in children.

“It is exciting that Stephen and his team are able to provide answers for families from New Zealand and around the world, when no-one else can,” Mr Edmonds says.

New Zealand is “very fortunate” to have retained Professor Robertson’s expertise, he says.

“As well as training the next generation of talented researchers in his lab he is also now helping lead the future thinking about how New Zealand can best utilise rapid advances in genomic technologies to improve outcomes for our children.”

While the recent publications highlight some of Professor Robertson’s latest work, he has for many years led profound genetic breakthroughs – the first in 2002 – discovering a rare disorder now named Otopalatodigital Syndrome, which afflicted a Māori whānau from the far North.

The Otago graduate first met the whānau while working as a paediatric registrar at Starship Children’s Hospital in the 1990s. He was moved when he learnt their tragic history which involved four of the women losing seven baby sons between them. The babies were deformed at birth and died soon after.

Funded by a Nuffield Medical Fellowship, Professor Robertson studied at the Institute of Molecular Medicine at Oxford University between 1999 to 2002 and after years of hard toil, eventually identified a gene responsible for the babies’ deaths, enabling a diagnosis and potential genetic testing to answer some of the whānau’s concerns heading into the future.

But not only did Professor Robertson find a name and a diagnostic gene test for the disorder, his research helped turn a corner in the understanding of human development and led to insights into many diseases well beyond this single condition. The offending gene turned out to be implicated in a raft of congenital syndromes, surprising many geneticists internationally.

It is these eureka moments and the ability to help diagnose disorders that appeal to Professor Robertson.

“What we’re about is helping people understand and live with disability as best they can, and part of that’s through giving information about what causes it.”