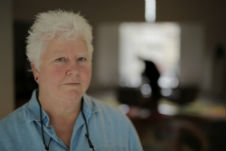 The University of Otago is delighted to announce the appointment of Scottish novelist Val McDermid as a Visiting Professor in the Division of Humanities.

Her appointment will run from 2019 to 2021. For each of these three years, Professor McDermid will spend up to eight weeks a year in Dunedin, where she will be attached to the University’s Centre for Irish and Scottish Studies.

Welcoming the appointment, Scotland’s First Minster, Nicola Sturgeon, says: “As one of Scotland’s greatest crime writers Val McDermid has a talent for keeping readers on the edge of their seats with her suspense-filled mysteries. She also has a real understanding of Scottish history, our politics and the Scots psyche that should make for a fascinating contribution to Scottish studies.

For the University, Professor Liam McIlvanney, Stuart Chair of Scottish Studies and Co-Director of the Centre for Irish and Scottish Studies added: “This is a hugely exciting appointment for Otago. To have a writer of Val McDermid’s eminence and experience attached to the centre over a sustained period will be of significant benefit to our students, our programmes and our whole institution.

Professor McDermid expressed her excitement at the appointment: “I have wonderful memories of Dunedin, so I’m delighted to be returning as Visiting Professor at Otago.

“I’m excited at the prospect of working with Professor McIlvanney and his colleagues in Scottish Studies and in Creative Writing over an extended period. And I anticipate this change of environment will fuel my creativity and drive it in new and challenging directions. It’s a tremendous opportunity – a dream ticket, really.”

Additional comments from eminent writers and academics about the appointment:

Stella Duffy (prize-winning novelist, playwright and performer): “Val McDermid is a great woman, a fine colleague and a dear friend. I’m so excited for her that she will spend more time in Aotearoa/New Zealand, a land and people she already loves and is excited to get to know better. I’m thrilled for Otago that you will get the benefit of a great writer, a generous and supportive teacher, a passionate advocate of reading and writing, of Scotland and of creativity. It’s a glorious match.”

Damian Barr (prize-winning author of Maggie and Me and former University of Otago Scottish Writers Fellow): “Liam McIlvanney and his colleagues have established and expanded their area of academic enquiry across disciplines attracting a diverse and engaged student body and building up a truly world-class range of associations. Val is one of the finest writers of her generation and not just in her chosen genre—she will bring an incredible energy to the department and the students lucky enough to work with her will benefit from her unflinching eye.”

Louise Welsh (prize-winning novelist and former University of Otago Scottish Writers Fellow): “Val McDermid is one of Scotland’s most eminent, politically aware and generous writers. She will be a superb mentor to students at Otago. As a previous fellow of the University of Otago, I know that Val will receive a warm welcome and that she will find the country and its people an inspiration.”

Craig Sisterson (book critic, founder of the Ngaio Marsh Awards, and Chair of Judges of the McIlvanney Prize in Scotland): “Calling Val McDermid the modern-day Queen of Crime actually undersells her significance in the world of storytelling and culture. She is a woman of huge mana, formidable intellect, and a generous and compassionate heart. I am absolutely stoked that she will be a Visiting Professor at Otago over the next three years, both for the student body who will get untold value from her presence and for Professor McDermid herself who gets to spend an extended period in a great part of the world.”

Graeme Macrae Burnet (author of Booker-shortlisted novel, His Bloody Project): “This is a tremendous appointment for the University of Otago. Val is an inspiring and influential figure for many in the literary world and beyond. She’s a brilliant speaker and has a long-standing commitment to nurturing new talent. I’m sure the students of Dunedin will benefit hugely from her presence there.”

Professor Gerard Carruthers (Francis Hutcheson Chair of Scottish Literature at the University of Glasgow): “Otago’s appointment of Val McDermid as Visiting Professor is good news not only for New Zealand but for Scottish Studies everywhere. She is one of our sharpest observers of human life in fiction and that collocation of ‘Scottish Studies and Crime Writing’ in her title at Otago marks out the wide and cosmopolitan reach of Val McDermid and modern Scottish literature. This is a tremendously satisfying and exciting development for Scottish Studies and its students in both hemispheres of the world.”