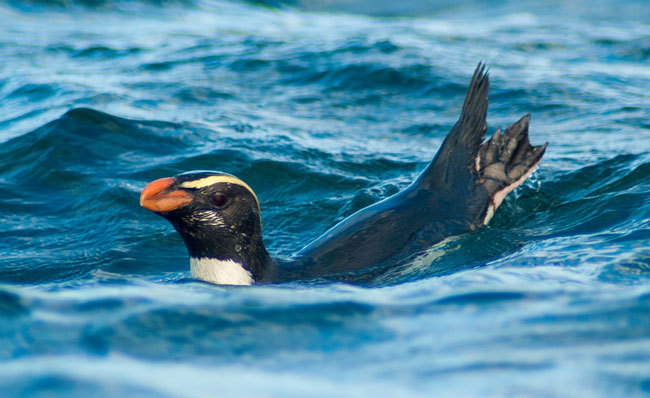 Imagine making a 7,000km journey just for dinner. That, University of Otago scientists have found, is the life of the elusive Fiordland penguin.

In a study, just published in PLoS One, a group of international scientists satellite-tracked Fiordland penguin / tawaki during their post-breeding journeys and found the birds cover distances of up to 7,000km in just eight weeks. 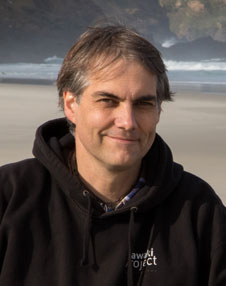 Lead-author, Dr Thomas Mattern of Otago’s Department of Zoology, says little is known about tawaki despite them living and breeding on the New Zealand mainland.

The birds inhabit the rugged and inaccessible coastline and fjord systems of south-western New Zealand, and are known to undertake long migrations outside their breeding period.

“Tawaki go on a big trip once their chicks have fledged. On this trip the penguins need to recover from the exhausting chick rearing duties and pack on weight in preparation for their annual moult,” Dr Mattern says.

During this so-called pre-moult journey, time is of the essence as the birds only have eight to 10 weeks before they have to make landfall again to replace their entire plumage at once. During the moult, the penguins cannot go out to feed and have to stay on land for three weeks, so it is important for the birds to gain a lot of weight during this journey. 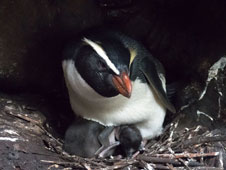 The birds inhabit the rugged and inaccessible coastline and fjord systems of south-western New Zealand.

“One would think that the birds try to conserve as much energy on this trip as possible. But what we found is, simply put, crazy,” Dr Mattern continues.

The study revealed, in a relatively short period of time, the penguins travelled enormous distances towards Antarctica to reach the sub-Antarctic Front almost 3,000km south of New Zealand and Tasmania. After only eight weeks they returned to the breeding sites to moult, having travelled as far as 7,000km during their foraging.

Co-author of the study, Dr Klemens Pütz from the Antarctic Research Trust, describes this as “an incredible achievement for a flightless seabird”.

“The question is why the penguins leave on such an epic journey, at a time when the ocean productivity along their coastal breeding sites reaches its peak. There should be more than enough food for them just on their doorstep.”
The authors believe the penguins may be following an instinct rather than an actual need to forage in sub-Antarctic waters.

“Tawaki are one of several crested penguin species, a group that likely evolved in the sub-Antarctic region,” Pablo Garcia-Borboroglu, President of the Global Penguin Society and author of the book Penguins: Natural History and Conservation, says.

“Most crested penguins breed on islands that are located close to the sub-Antarctic front, a productive oceanic region that surrounds the Antarctic continent. Tawaki, on the other hand, breed very far north from this region.”

They believe the penguins travelling such huge distances just to reach this region may reflect a remnant behaviour from an ancestral crested penguin species. Moreover, it casts new light on the current distribution of the species.

“So far, we thought that tawaki used to breed all over New Zealand, and that hunting pressure in the past 500 years caused the species to retreat to the remote areas they breed in today”, Dr Mattern explains.

“However, considering that breeding further north would add another few thousand kilometres to the penguins’ journey, it appears that tawaki breed exactly where their migratory behaviour allows them to.”

The Tawaki Project is largely funded by the Global Penguin Society, the Antarctic Research Trust, Birds New Zealand and private donations, and conducts baseline research that is essential for conservation.

“Without the support of the many private donors, local communities and stakeholders, we would have never been able to realise this research”, Dr Mattern concludes.

“To know that we have true marathon penguins living on our shores is as much an achievement of our supporters as it is that of the penguins which volunteered to carry satellite trackers for us.”