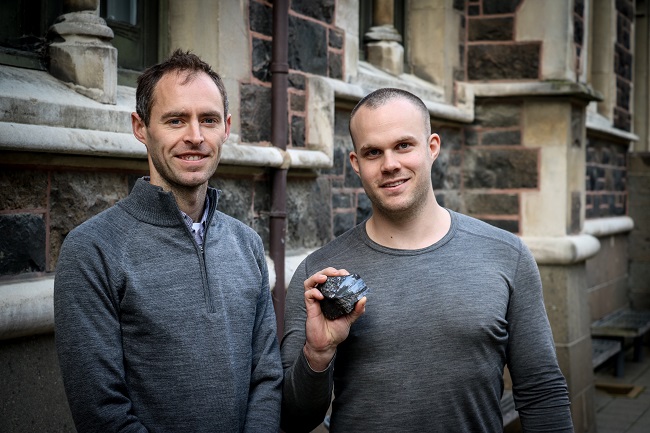 Steven Smith left and Matthew Tarling with a sample of fossil fault surface.

The first natural example of a fossilised earthquake in serpentinite (type of rock) is providing new knowledge about the extreme forces and chemical reactions that occur during seismic ruptures.

The world-first discovery has been made by University of Otago PhD student Matthew Tarling, supervisors Steven Smith and James Scott from Otago’s Geology Department, and Cecilia Viti from the University of Siena in Italy. Their findings are published this week in the esteemed journal Nature Communications: Dynamic earthquake rupture preserved in a creeping serpentinite shear zone

Mr Tarling, who led the research, describes how extreme heat can be produced during earthquakes, similar to the practice of rubbing your hands together for warmth.

“The heat that you feel comes from the friction between the palms of your hands as they move against each other. A similar process occurs during earthquakes, as giant pieces of the Earth’s crust slide against one another along fault surfaces. However, the conditions are so extreme during earthquakes that sometimes enough heat is produced to melt rocks along the fault surface. When the earthquake stops, the melt cools down and solidifies to form a distinctive glassy layer of rock: when geologists find evidence for this kind of ‘friction melt’ they can be sure to have found the site of an ancient earthquake.”

The problem is that friction melt is actually quite rare, and so geologists must search for other evidence of extreme frictional heating to identify the location of ancient earthquakes.

In their study the Otago-lead team outline the first evidence for high-temperature dehydration of the mineral serpentine during an ancient earthquake. Supported by funding from a Marsden fast-start award, the team studied tiny fragments of fault rock from the Livingstone Fault in New Zealand.

“The Livingstone Fault is a spectacular ancient fault that cuts right through the North and South Islands of New Zealand. Because the rocks that were moved together by the fault produce quite barren soils, very little vegetation grows, which provides us with a unique opportunity to study the inner workings of the fault zone in amazing detail,” Mr Tarling says.

Using high-resolution transmission electron microscopy, the research team found that thin layers of serpentine inside the fault were converted in to two new minerals: olivine and pyroxene. This kind of reaction only occurs at temperatures above 800°C, and when the reaction happens it releases substantial amounts of water that could pressurise the fault surface. The team then used numerical modelling to show that the reaction probably occurred by frictional heating during an ancient earthquake with a magnitude between three and four on the Richter scale.

Dr Smith says the discovery is a rare and pivotal step in identifying ancient earthquake ruptures, and also offers crucial information about the processes that cause faults to weaken and release energy during rupture.

“When an earthquake happens, we can feel and measure the effects of the ground shaking, but the earthquake rupture itself is taking place many kilometres beneath our feet, and that makes it really difficult to understand what is going on. Imagine trying to correctly piece together all of the parts in a car engine just by listening to the car from many kilometres away: it’s basically impossible, and we have to come up with more direct ways of studying the deep rupture itself. What we are trying to do here is understand what actually takes place on the fault surface during rupture, because those processes hold the key to understanding the physics of earthquakes.”

At this early stage in his career, Mr Tarling (29) hopes that it won’t be the last significant discovery he is involved with.

“What we’ve discovered will help geologists better understand the behaviour of rocks along tectonic plate boundaries like subduction zones. For a long time this has only been understood in a theoretical or experimental context, but our newly-identified signature in a natural fault opens the door for more discoveries regarding the extreme forces that have shaped the Earth’s continents.”