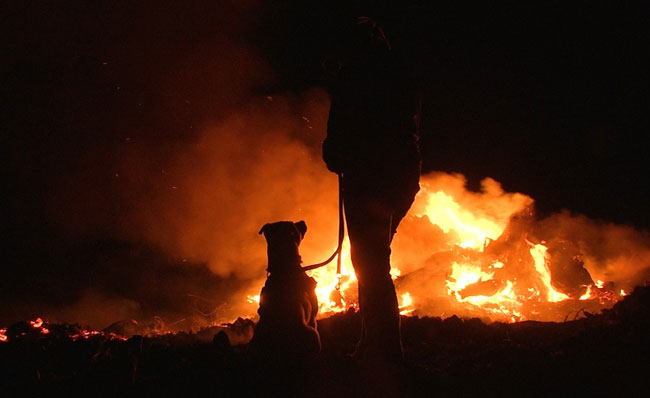 A still from Sarah Hight’s film, A Million Dollar Nose?

A new approach in the fight against American foulbrood – a disease effecting beehives across the world – is the topic of a New Zealand-made film shortlisted in the International Jackson Hole Science Media Awards being held in Boston, USA, this week (26-28 September NZT).

University of Otago Master of Science Communication graduate Sarah Hight’s film, A Million Dollar Nose? examines the novel approach of using sniffer-dogs to detect American foulbrood in beehives. American foulbrood disease is caused by a bacterium which contaminates honey bee larvae and pupae, and is widely considered the most serious disease effecting bees in New Zealand. Contaminated hives and their tens of thousands of bees are often destroyed, costing the honey/beekeeping industry millions of dollars a year.

“My intention with A Million Dollar Nose? was to educate people about one of the many threats facing honeybees around the world. On a broader scale, I wanted to encourage people to be open minded towards creative and innovative agricultural tools like the detector dogs featured in my film,” Ms Hight says.

The film features a Canterbury beehive operation which employs the services of Rene Gloor, a detector dog trainer who believes you can train a dog to detect anything. With sniffer-dogs unproven on a scientific level as tool against American foulbrood, Ms Hight wanted to create discussion and draw attention to their use.

“Agricultural systems are facing all sorts of threats around the world, so safeguarding our resources with innovative ideas is more important than ever. I wanted to tell a story about the plight of bees around the world and raise awareness about their importance to our survival as crop pollinators,” she says.

Ms Hight created the film in 2016 for her master’s thesis project while completing her studies in the University of Otago’s Master of Science Communication programme.

With her study successfully completed, and a degree in Zoology also under her belt, Ms Hight has gone on to gain employment with filmmaking unit NHNZ, in Dunedin, where she is honing her talents in storytelling about the natural world.

“I would love to create more documentaries that educate people about nature and inspire change beyond the film. In our information saturated society, it’s really easy to be well informed about the many issues in the world but knowing what to do in the face of so many problems can be daunting,” Ms Hight says.

Watch the trailer here on Vimeo: A Million Dollar Nose?