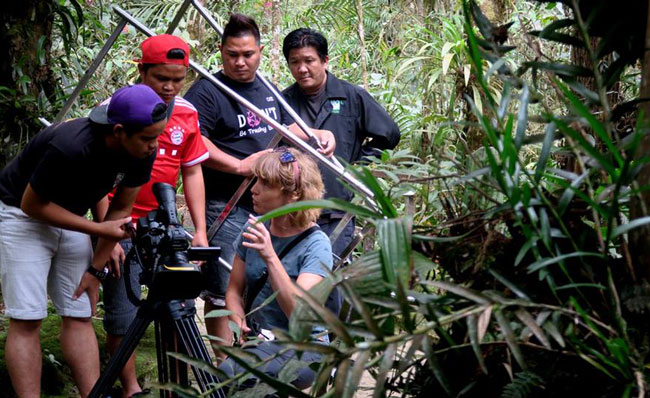 The Guardian of Kinabalu, a film co-produced by Dr Wiebke Finkler of the University of Otago’s Department of Tourism and Professor Lloyd Spencer Davis of the Centre for Science Communication, has been awarded the Special Jury Prize at the 11th International Kuala Lumpur Eco Film Festival. The award was announced at a formal ceremony in the Malaysian capital on 26 October, with the documentary having its world premiere the next night.

The film is about Mount Kinabalu, the centrepiece of a national park in Borneo that is the most biologically diverse place on Earth. Made in collaboration with Borneo’s University College Sabah Foundation, the university’s former Vice Chancellor, Professor Ismail Ghazally, is the film’s Executive Producer. 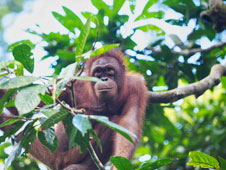 An orangutan looking to a bleak future: a threatened species in Kinabalu Park and the rest of Borneo. Photo: Lloyd Spencer Davis

The story melds the wonderful wildlife of the park with the beliefs of the local Kadazan Dusan tribe to whom the mountain is Heaven on Earth, the place where their souls go when they die. The film follows one Kadazan Dusan local in particular, park ranger Alim Biun, who has spent his lifetime devoted to protecting the park and its inhabitants from the threats of deforestation that plague all of Borneo.

“Ecotourism is really the major hope for the park and the rest of Borneo, and this film will help that cause,” says Professor Ghazally.

However, ecotourism must occur in a way that is culturally sensitive if it is to be appreciated and sustainable. The film highlights an incident in 2015 when an earthquake killed 18 climbers on the mountain after a group of tourists undressed on the mountain. Many Kadazan Dusun believed that such disrespectful behaviour had angered the spirits of the mountain and four of the tourists were arrested.

“Film is such a powerful medium to effect change in that important intersection between culture, conservation and tourism,” says Dr Finkler. “We hope that this film will not only attract ecotourists, thereby providing an economic incentive to protect the area, but also have them appreciate the traditions and beliefs of the Kadazan Dusun.”

While many of those involved in the film are based in Borneo, there is a strong Dunedin flavour to the film.

The Centre for Science Communication’s Robert Brown was the main cameraman, with Dr Finkler and Professor Davis also contributing to the camera work. Dr Karsten Schneider of Dunedin’s BurningFish Productions animated the Kadazan Dusun legends that are integrated into the film. Leyton Glen composed the music and produced the soundtrack, Dunedin actor Brian Beresford was the narrator, and the colour grading was carried out by St Leonard’s filmmaker Phil Davison.

“Filmmaking is a team sport and we are very fortunate in Dunedin to have so many talented filmmakers to call upon,” says Professor Davis. “You never set out to win awards like this – that is not the main goal – but it is terrific to have all of our efforts recognised in this way and, hopefully, it will go some way towards helping to publicise and protect this very special part of the world.”

The Guardian of Kinabalu will have its New Zealand premiere at the University of Otago in November.