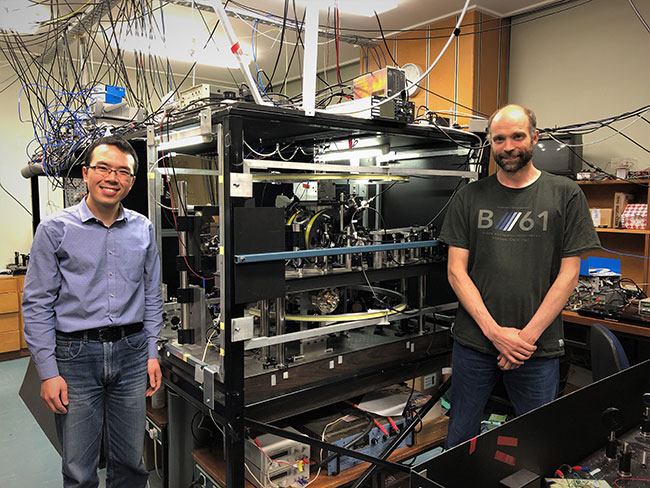 PhD candidate Shijie Chai and Dr Mikkel Andersen, of the University of Otago’s Department of Physics, with their gravimeter.

The world has one official kilogram against which all other country’s kilograms are measured and scales calibrated.

It lives in France, where the world’s official metre, now retired, was also located.

But what if that kilogram was no longer accurate? What if it accumulated deposits on its surface? Or it deteriorated?

The implications of these possible changes could be devastating for the pharmaceutical, engineering and aviation industries.

Dr Mikkel F. Andersen, of the University of Otago’s Department of Physics, says the world will soon move away from the artefact definition of a kilogram. His research might assist in the process.

“The kilogram is going to change, come May next year it won’t be that one in France.”

Instead, a kilogram will be defined by choosing an exact value of Planck’s constant, a quantity that relates weight to electrical current. A key component of this will be an accurate measure of the gravitational pull at the precise spot future calibration weights are being measured.

There are currently two portable devices capable of accurately measuring gravity. However, these gravimeters are both expensive and large. New Zealand doesn’t have such a machine. The closest is in Australia.

“However, if there is only one type of device in the world that can measure gravity, what happens if that device is off for some reason? Then all the scales in the world will be off. It is important to have a variety of devices capable of measuring gravity.

“My goal was to make a smaller, more compact device, which was also easier and cheaper to build,” Dr Andersen says.

Using simple laser technology, and ideas from the arcane theories of quantum chaos, he and PhD candidate Shijie Chai and Postdoctoral Fellow Dr Julia Fekete have created such a device, described in the journal Physical Review A.

“We have shown the principle works and believe it could be as precise as others currently available,” Dr Andersen says.

The device drops a cloud of atoms, then makes interference patterns in those atoms to allow an accurate measurement to be taken with a laser. The speed of light and measure of time are clearly defined so there is no guess work in those elements of the device.

Gravimeters are used to conduct gravity surveys, which are much cheaper than drilling. Geologists use them to find out what rocks are below the ground’s surface; archaeologists use them to identify buried bones; and they are widely used in mineral exploration as oil is lighter than rock.

The team intends to secure funding for the next phase of the research, which will involve reducing the model’s size, and increasing the length the atoms drop, which increases the accuracy with which it measures gravity.