Catherine Thomas, who undertook the study as part of her Master’s research project, examined how people comprehend warning labels on consumer products, specifically potting mix and bleach. While the existing warning label used on bleach was well understood by the 100 participants involved in the study, this was not the case for potting mix.

“Bleach was rated as more dangerous, more likely to have a negative or severe outcome and people knew from the warning label what protective equipment was needed when using it,” Ms Thomas explains. 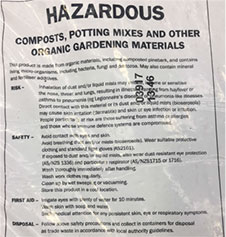 An existing warning label on a bag of potting mix.

“While the existing potting mix warning label was rated highly in terms of danger and the likelihood of negative or severe outcomes, participants failed to recall the protective equipment needed and verbally told us the warning was terrible,” she says.

Participants’ responses included: “Nobody’s going to read it because the technical language is kinda [sic] hard to understand” and the label seems “more for people involved with that [potting mix] every day, not just a home gardener”. 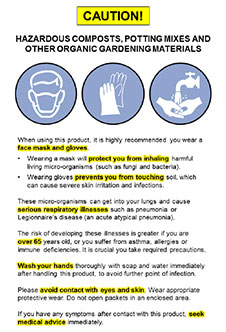 This warning label for potting mix designed by Ms Thomas yielded better results than the existing warning labels in terms of comprehension and risk perception.

As a result, she recommends new warning labels for potting mix increase symbol use for noticeability, reduce text, add bullet points and highlight relevant components to make the warning optimal.

“New Zealand has one of the highest incident rates of Legionnaire’s disease worldwide which suggests that something desperately needs to change in order to reduce the number of incidents per year.”

Currently, there is no statutory requirement in New Zealand for warnings on potting mix packets and most are industry-type labels, which do not cater specifically for the home gardener.

“As well as changing the warning label design, changes to the current statutory law regarding potting mix warning labels needs to be considered,” Ms Thomas says.

“If warnings are designed in a way that increases comprehension and risk perception and encapsulates both the home gardeners and industrial users, the likelihood of people over the age of 65, or other more sporadic cases, developing Legionnaires disease may reduce.”

Most recently, a 77-year-old Christchurch man died on December 20, 2018 from complications of Legionnaire’s Disease after handling potting mix.

Based on her findings and this recent case, Ms Thomas emphasises the importance that newly designed warning labels could have for users and suppliers of potting mix in New Zealand.