Professor Vicky Cameron has devoted her distinguished University of Otago career to scientific discovery, or, in her own words, “the hunting of tiny things”- from larval tapeworms in fish, to brain cells expressing newly-described hormone genes, and culprit gene variants contributing to human heart disease. 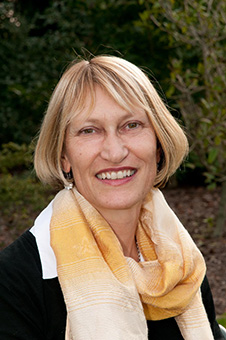 Her relationship with Otago University has been lifelong, but now after a 48-year dedication to research, Vicky is retiring, leaving her roles as Deputy Dean of the Christchurch campus and Group Leader of the Christchurch Heart Institute’s Omics Laboratory in the Department of Medicine.

“I’m so proud to have built a worthwhile and satisfying career at the University of Otago and feel huge loyalty towards not just the institution and all it’s enabled me to achieve, but also to the colleagues and peers who’ve both inspired and supported me” she says.

Vicky was born in Dunedin into an Otago University whānau. Her parents were both employed at the university’s School of Physical Education. While her mother later pursued secondary school teaching, her father remained to work at the university’s then-Education Department, where he served until retirement.

Vicky first walked onto the Dunedin campus as a fresh-faced first year student in 1973, graduating with a Zoology honours degree four years later. Her Honours research project led her down to Antarctica and two summer stints researching the life cycle of the tape worms found in fish which infest weddell seals, hunting their larval stages in the fish they eat. Vicky credits her then-supervisor, parasitologist Professor Warren Featherston, for challenging the establishment of the day in allowing a 19-year old female student to travel down to the ice to investigate the world of polar science – Vicky was a trailblazer as the first female to summer-over and live at Scott Base. 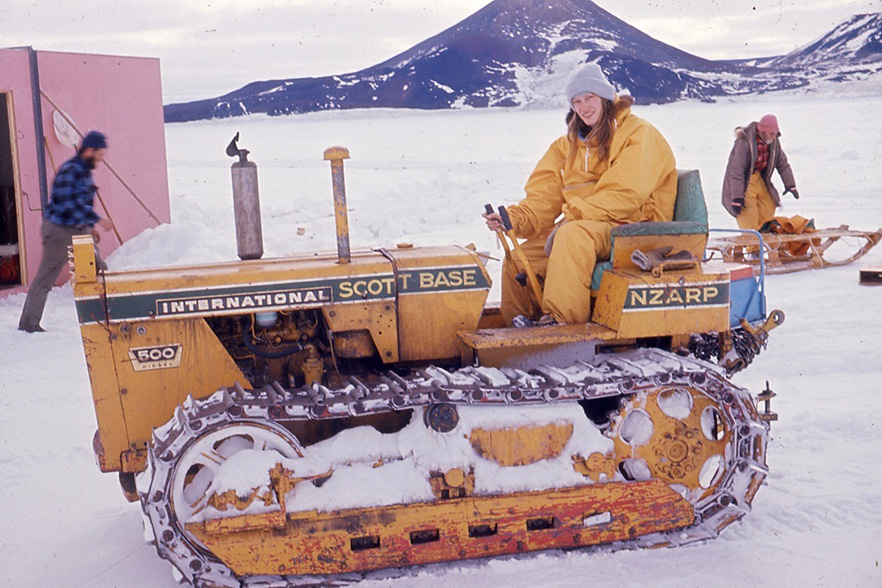 “Those trips down to the ice were incredibly formative both professionally and personally, launching my lifelong interest in polar regions and sparking a lifelong passion for mountaineering”.

After a brief stint at Dunedin’s Wellcome Institute, Vicky and husband David set off on their OE, including 6 months’ exploring Europe and Russia in a yellow VW Kombi. When travel funds eventually ran low they settled in London, with Vicky taking a position as a Research Assistant at Hammersmith Hospital in obstetrics and Gynaecology.

In 1981 the couple returned to New Zealand, settling in Christchurch with its easy access to the Southern Alps for weekend mountaineering trips. Newly employed at the University of Otago’s Christchurch campus, Vicky worked as a Scientific Officer in the Department of Medicine under Professor Eric Espiner (who, as Professor Emeritus, is still an active researcher today). When not spending time in the mountains, climbing peaks or trail running, she completed her PhD on The Role of Brain Hormones in the Regulation of Hypothalamic-Pituitary Secretion During Acute Haemorrhagic Stress.

In 1990, Vicky landed a dream post-doctoral position working with an icon in the field of endocrinology, Professor Wylie Vale, at the Salk Institute, shifting the family – now with the addition of two small children – to San Diego, for two rewarding but tough years living off the meagre funding from an NIH Fogarty Fellowship.

On her return to the University of Otago, Christchurch, in 1992, Vicky’s background experience in physiology, combined with her early adoption of molecular techniques, placed her at the forefront of a wave of fresh discovery around new peptide hormones and neuroendocrine factors. She published a series of papers mapping the tissue distributions of gene expression for a variety of newly-identified signaling molecules. Her research helped identify that the dual endocrine systems, the renin-angiotensin hormones and natriuretic peptides, had crucial neurohormonal functions within the brain, playing mutually antagonistic roles in regulating the body’s response to physiological stress, and salt and water balance. She also contributed to the understanding of how the natriuretic peptides ANP and BNP play key roles in the development of cardiac fibrosis in both an ovine model of heart attack and the NPR-A knockout mouse (in collaboration with Nobel Laureate, Professor Oliver Smithies).

In the 2000’s, Vicky’s focus segued from animal models of heart disease to human cardiovascular genomics, investigating the influence of genes on the risk of developing coronary heart disease or heart failure and prediction of outcomes in heart disease patients. One pivotal study was performed alongside Dr Anna Pilbrow, one of Vicky’s first PhD students (now a Senior Research Fellow in the CHI Omics lab). They investigated the top genomic risk locus for coronary heart disease, demonstrating how genetic variation in this region alters the expression of a signalling pathway in the human heart and arteries, promoting cell proliferation and leading to atherosclerosis over a lifetime.

Although highly impressive, Vicky’s own summation of her research achievements is modest.

“I’ve never managed that once-in-a-lifetime research breakthrough most researchers dream of” she admits. “Rather, my career progress has been incremental. But I’m especially proud of the post-doc work I’ve been involved in around gene expression and the early days of understanding how genes and DNA worked. I put out papers tracking the tissue distribution of newly-discovered hormones and signalling molecules in differing organs, providing the first cell localisations of where their genes were switched on.

“I’m still writing up my latest paper – an on-going examination of DNA methylation in a cohort of low birth weight babies first recruited by now-retired Professor Brian Darlow in 1986 – methylation being one way the environment influences how our DNA is switched on. We tracked the cohort most recently at age 28, and were able to also obtain DNA from the Guthrie heel prick blood samples as infants on three-quarters of the group. Significantly we’ve been able to show markers in their methylation at birth which could help predict the heart health outcomes for future low birth babies as they grow into adulthood.”

Vicky also led the cardiovascular theme for the first 5-year tranche of the Healthier Lives National Science Challenge and has contributed to several national science bodies, providing advice on policy and scientific direction and assessing grant applications. She is currently a Board member for the Health Research Council, and is a past member of the Marsden Council and Heart Foundation Scientific Strategic Advisory Group. She was elected an International Fellow of the American Heart Association in 2011 and currently holds a position as an International Ambassador for the American Heart Association’s Council for Genomics and Precision Medicine.

In 2007, the former Dean of the Christchurch Campus, Professor Peter Joyce, created tenured positions for five senior Research Scientists at UOC, and Vicky says she was fortunate to be one of them. This says for the first time in 35 years this gave her job security.

“That made such a difference for me and was so liberating! I have to admit, one thing I won’t miss in retirement is having to apply for yet another research grant!”

However, the list of things Vicky WILL miss is significant.

“I will really miss my colleagues, my lab team and the support and friendship of so many inspiring people both here at UOC, around Aotearoa New Zealand and internationally. I know our research lab is going to be in absolutely excellent hands with Dr Anna Pilbrow now leading it. We boast a wealth of talent and I can’t wait to watch and enjoy the team’s achievements in future.

“I really am incredibly loyal to Otago University, it’s been integral to my life and entire career. And the team up here in Christchurch are so incredible. We have all the benefits of being backed by the might of Dunedin yet are able to be progressive and collaborative because we’re so small. We really work together, help each other out and have a great symbiosis from our close clinical connections with the hospital and CDHB”.

Vicky will still ‘keep her hand in’ at UOC however, as a member of the Project Steering Committee for the new UOC campus building, ensuring it’s new laboratories are “fit for purpose”.

Although conceding her mountain-climbing days are now over, Vicky has plans for an active retirement. After a holiday walking the Milford track in March, she and David will focus their energies on building a new bach on family land on the outskirts of Wanaka. She also hopes to spend more time with her whānau, daughter Sophia, her son-in-law and her grand-daughter in the UK and her CDHB medical registrar son Peter and his wife who live in Christchurch. She also has a challenging writing project to immerse herself in – transcribing her grand-father’s precious World War 1 diaries.

Vicky is humbled to now head into retirement with one further accolade – the University of Otago Council awarding her the title Emeritus Professor on her birthday last November.