University of Otago Printer in Residence 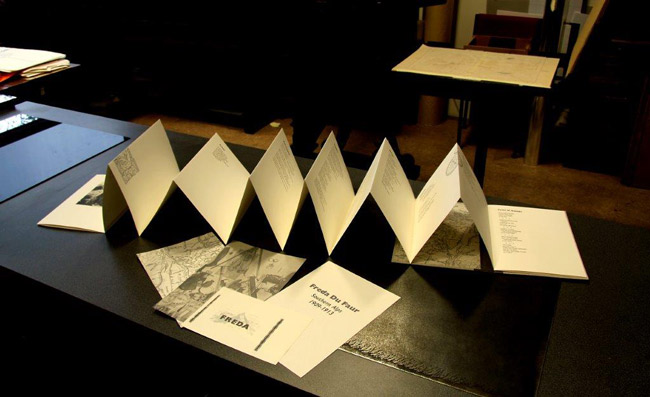 A collection of poetry on Freda Du Faur, printed by Sarah Smith on the University of Otago Otakou printing press.

This year’s University of Otago Printer in Residence programme has produced a unique publication on the life of a pioneering female climber who scaled New Zealand’s highest peak.

The 2016 Otago Printer in Residence was Sarah Smith, from Dartmouth College, Hanover, in New Hampshire, USA. Sarah was based at the University of Otago’s letterpress studio Otakou Press during six weeks in August and September 2016.

Working with poet Rhian Gallagher and artist Lynn Taylor, she designed a book of limited-edition poems, and hand-set and printed the text. The poetry is centred round the life and activities of Freda Du Faur (1882–1935), the first woman to climb Aoraki/Mount Cook.

A total of 120 copies of this uniquely folded book were printed; 100 of those are for sale.

Sarah also presented an open lecture on campus, and was present at the opening of book art programme exhibitions, one at the University of Otago on September 2, and more recently back at the Baker-Berry Library, Dartmouth College.

The value of the Printer in Residence programme 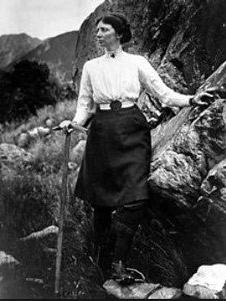 The University is fortunate to have three working printing presses: an 1845 Albion, an 1817 Columbian ‘Eagle’ Press, and a 1950s Vandercook proofing press. The Press room also has an etching press.

The first Printer in Residence (PIR) programme at the University of Otago was initiated back in 2003 to encourage awareness of the print facilities in the Library, and to foster book-making both within the University and to the wider arts community.

University of Otago’s Special Collections Librarian Dr Donald Kerr says it is the only residency programme in Australasia, and has become a sought-after position in the international printer community.

“It’s a community outreach programme that is a real point of difference for the university, and is a way of utilising the fabulous printing press resource we have.”

“And the programme is a great way of promoting Dunedin – the printers have loved living here and are keen to return and renew links with people here. Sarah really enjoyed her involvement in the programme.”

Both the University of Otago and Dartmouth College are part of the Matariki Network - a collaborative international group of seven leading, like-minded universities, each among the most historic in its own country, and recognised as being leaders in both teaching and research.

Dartmouth College Libraries and the University of Otago Library are celebrating the links between these two Matariki universities through an exchange of exhibitions to celebrate both institute’s Book Arts programmes. This is also a way of extending collaborations formed from the 2016 Printer in Residence programme. 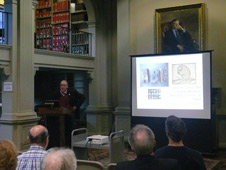 Dr Donald Kerr talking about the University of Otago book arts collection at Dartmouth College earlier in the month.

The exhibition of Book Arts materials from Dartmouth College, used in their own 25th anniversary celebrations last year, is now on display in the University of Otago Library de Beer Gallery, Special Collections in the University of Otago’s Central Library (first floor). The exhibition opened on 2 September and will run until to 2 December 2016. Staff and students are welcome to come in and view the collection.

A similar University of Otago exhibition is being hosted by Dartmouth Libraries. Otago has sent its entire collection of editions from the University of Printer in Residence programme (2003-2015), which are now on display.

Dr Kerr attended the Otago exhibition opening at Dartmouth earlier in October, and provided a series of talks on our Printer in Residence activities and the strengths of Otago’s Special Collections. He said the Dartmouth response was fantastic, with the library staff very impressed with the standard of work.

“Both this year’s Printer in Residence project and the dual exhibitions have been hugely positive, and will deliver benefits that will extend far beyond the two events. It’s forged valuable links, and opened the doors for on-going collaborations – we look forward to making the most of future opportunities.”

Reflections on the 2016 Printer in Residence programme

Sarah Smith says the Printer in Residence programme was a wonderful project to introduce her to the people, history and landscape of New Zealand.

“I grew up in New England and now work at Dartmouth College, in New Hampshire. This project brought me to New Zealand for the first time, and it was an exciting adventure from the outset. 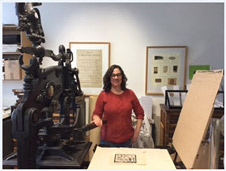 Printer Sarah Smith on her first day at the University of Otago.

“I must admit though, being far from home for six weeks, collaborating with strangers on a subject I was only vaguely familiar with, and producing a finished edition of books in a print studio that was new to me, was all more than a little intimidating.

“Fortunately, everyone I encountered in Dunedin, at the University of Otago and St Margaret’s College (where I stayed) was incredibly friendly, generous and full of humour. I felt right at home immediately; in fact, I told my husband to start looking for jobs and a house in Dunedin!

“The city itself felt wonderfully vibrant with book launches and art exhibitions every week, music playing, and amazing coffee and beer everywhere. How could one go wrong? Often, my new Dunedin friends took me out and about into the surrounding landscape, which was so astounding it often seemed unreal.

“Working with Lynn Taylor and Rhian Gallagher was an absolute pleasure, and I’m happy to say we’re all friends who will stay in touch. The project grew smoothly and organically as we bounced ideas off each other, then honed down the key ideas to produce an edition of 120 concertina style books alluding to the mountain range and Freda Du Faur’s journey.

“Donald Kerr, the Special Collections Librarian who organised the project and his assistant Romilly Smith were fantastic at guiding me and keeping us all on track. Although the book design was out of their norm, Don Tobin and the University Binders were patient with my crazy plans, and put together our prints in a handsome finished edition.

“I was sad to leave this special experience, and the place and the people I became so attached to. I can only hope to come back again someday soon.”

Poet Rhian Gallagher loved using the medium of poetry to celebrate the life of a fascinating female mountaineer who tackled New Zealand’s highest peaks as well as taking on the constraints of gender in the early 1900s. She spent part of last summer in the Aoraki Mt Cook area to research, write and experience the environment first-hand, producing 11 poems that attempt to show what Freda was feeling at this period in her life. 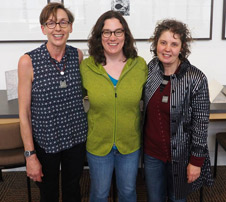 “Half way through 2015 Donald invited me to be a part of the project. It was a great opportunity to produce a set of poems that explored one subject. I had done research on Freda Du Faur and written a few small pieces. The project gave me the impetus to develop the work, focusing specifically on Du Faur’s four seasons climbing in the Southern Alps.

“Freda defied convention, staying overnight in a bivouac with male guides, unchaperoned. She rejected the social constraints around dress, designing her own climbing apparel. She was first woman to climb Aoraki Mt Cook. She was also the first ever, together with guides Peter Graham and Darby Thompson, to make the Grand Traverse of the three peaks of Aoraki-Mt Cook.

“Her achievements made it easier for women mountaineers who followed in her wake.

“One of the ways I’ve tried to gain access to Freda was through the environment. The Southern Alps is incredibly dynamic. If there’d been no erosion Aoraki Mt Cook would be towering into the stratosphere; that’s how much uplift there is. For Freda it was liberating place - once out of range of so-called civilisation she came into our own.

“Du Faur’s life as a whole is complex and fascinating and would make a great film.

“Working with Lynn and Sarah was, like the book itself, an unfolding experience. Sarah developed the concept for the book and Lynn brought a unique visual element to the work. Both Sarah and Lynn worked incredibly hard during the printing itself – they literally brought the book to life. Collaborating with these two amazingly skilled, creative women was a real pleasure.”

Lynn Taylor is a local printmaker who often incorporates text and book structures in her artwork, and has followed the prestigious Printer in Residence programme with interest for years. This sparked a desire to be involved in printing a publication herself, and says it was a career highlight when Donald Kerr and Sarah Smith invited her onboard. 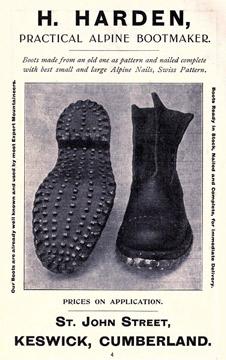 Print maker Lynn Taylor was inspired by advertising of the time.

“They chose me to print images to support the context of Rhian's poems because I often work with maps and I my preference of subject matter is historical.

“I translated images, including a photo of Freda and detail of a glass plate negative photo taken by Adamson, onto photopolymer plate, a light sensitive printing plate that has parallels in photography. These plates were printed intaglio, meaning ink is pushed into the surface of the plate, and excess ink is then removed by rubbing the plate in a figure of eight motion with a fine cloth.

“A crucial part of the project was undertaking some background research into Freda at Hocken Collections. There, in among the Alpine Correspondence Archives (1880-1920), were letters handwritten by Freda herself and pages from a guide book recording climbs. I was beside myself with excitement and this source contextualised the project for me in a visual and meaningful way.

“The collaborative nature of the project was very effective, and definitely a case of achieving more together. Donald, Sarah, Rhian and myself were part a wider circle of people that ensured the Freda project came together: Kaia at Southern Papers, Romilly Smith from Special Collections, Don and Steve at the Bindery, Library Staff and some friends who came in as 'clean hands' speed up printing and putting type away. Working collaboratively meant there was time involved in communicating, sometimes compromises had to be made and Sarah and I both appreciated the opportunity to work outside the usual way we would make and do things.

“Interest in what was going on was very high. Some days we only had time for a couple of hours printing as we had so many visitors: staff, University and Art School student groups, archives staff, a book artist from Oamaru to name a few. We also encouraged students who pressed their noses up against the internal glass window in for a gander too. This was a great opportunity to show off what an amazing resource Otakou Press is and I would do it all again in a heartbeat.”