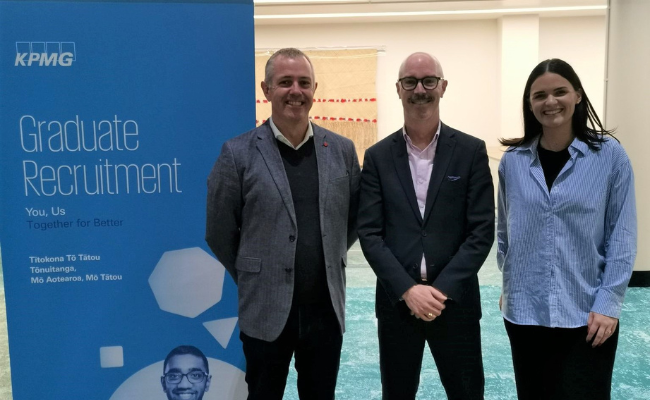 A recruitment event held at the Otago Business School recently was also an opportunity to announce two new scholarships for finance and accounting students.

On Wednesday 3 August KPMG and the Otago Business School hosted the session, where accounting and finance students could engage and learn from current pioneers in the industry, and the scholarships were announced.

KPMG Partner (Tax), Nick Hope, spoke at the August 3 session alongside other representatives from the firm before a social pizza session in the School’s atrium.

“These scholarships will be awarded annually and are called ‘Fulfilling New Zealand’s prosperity’ to encourage students to step into the great potential they have for the future,” Mr Hope says.

“The prizes will be awarded on the recommendation of the School’s Pro-Vice-Chancellor, Professor Robin Gauld, and after consultation with the Head of the Department of Accountancy and Finance.

“The first scholarship will be for the top student in the Financial Statement Analysis (ACCT 310) class and the second prize will be awarded to a third-year student who has undertaken extra community service alongside their academic excellence in accounting.” 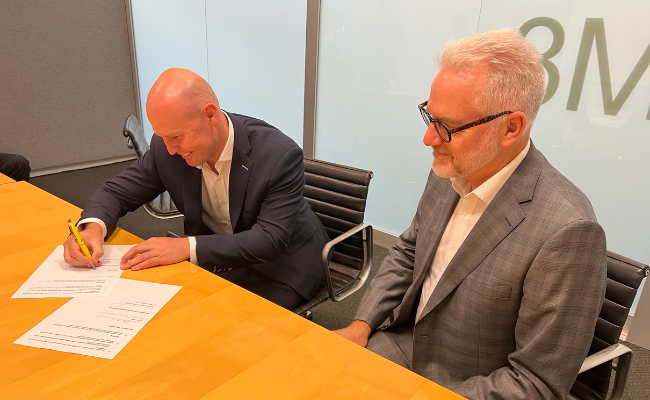 Nicholas Moss, KPMG Partner of Audit and Head of Insurance, alongside the University’s Vice-Chancellor, Professor David Murdoch at the scholarships signing in Auckland

The value of the prizes will normally be $1,000 and, separate to the monetary award, KPMG will fast track an interview or assessment day for each prize recipient.

Professor Gauld also attended the event, with the University’s Vice-Chancellor, Professor David Murdoch, having originally met with the KPMG team in Auckland earlier this year to finalise the scholarship agreement.

“It has been exciting seeing all the planning around this scholarship and recruitment event unfold and become reality,” Professor Gauld says.

“It has been a pleasure meeting and working with KPMG and we thank them for showing an active interest in investing into the education of the promising students we have here at the Otago Business School.

“The students have taken away with them a great deal of insight having met with these professionals today and we look forward to seeing who the first recipients of the scholarships might be.”