Upcycling hops into a new brew 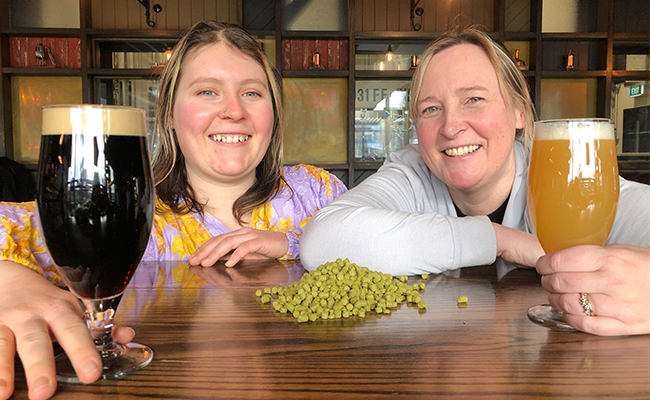 Can hops already used to make one batch of beer be upcycled to make another batch of beer? This is what one University of Otago Food Science honours student is trying to find out.

The way Emerson’s brews its beer means that dry hopping of the beer is only required in the fermenter and after that not much can be done with the spent hops, Menson says.

She had read papers suggesting spent hops can be composted, but that wasn’t viable given the quantities produced by Emerson’s. The spent hops were also too bitter for stock feed.

For this reason, the spent hops – which look a lot like finely cut tea leaves - were identified as a key waste stream that her project could be centred around.

“It's a mixture of some hop solids, beer and yeast cells. It comes out as a hazy mixture.”

Rather than attempt to turn the spent hops into another product, she wondered if it was possible to reduce the amount of fresh hops going into brewing beer, in the boiling stage, by supplementing them with the spent hops.

“Just to look at whether there is potential here, and could it be used as a commercial opportunity to reduce the amount of fresh hops going in the beer in the first place?”

As there isn’t any heat involved with the hops in the fermentation part of the process, there is still quite a bit of essential oils, alpha acids left within the spent hops, all of which contribute to the flavour of the beer, Menson says.

A large part of the project is addressing the sensory elements of the beer, such as how bitter the flavour is.

Menson says COVID-19 cut into what was already a short time frame of one year, and had she more time, she would love to further investigate the essential oil component.

Professor Jean-Pierre Dufour was appointed Food Science Section Leader in 1994 at the University of Otago. He befriended Richard Emerson, founder of Emerson’s Brewery, early in the brewery’s development, Menson says.

Professor Dufour passed away in 2007, and to pay tribute to him, Emerson’s annually creates a Belgian beer called ‘JP’ in his honour since Professor Dufour was from Belgium. Part of the profit from sales of the JP beer goes into an annual scholarship to support a student recipient for a degree incorporating research related to the technical, social or economic issues associated with the brewing industry.

Menson found out in May she was the recipient of the scholarship. The $5000 Menson won was a “massive incentive” to do well, she says.

In fourth year, Food Science students are encouraged to attend the annual Food Science and Technology (NZIFST) conference and the money allowed her to do that and become more a part of the food science community.

Menson says she has really enjoyed spending time in the beverage industry, and will consider looking for work within it, but also wants to graduate and assess her options.

Menson says she is grateful for the support she received from Emerson’s Brewery and the Food Waste Innovation research theme and wants to thank her supervisors Dr Graham Eyres and Professor Phil Bremer for all of their help during her project.