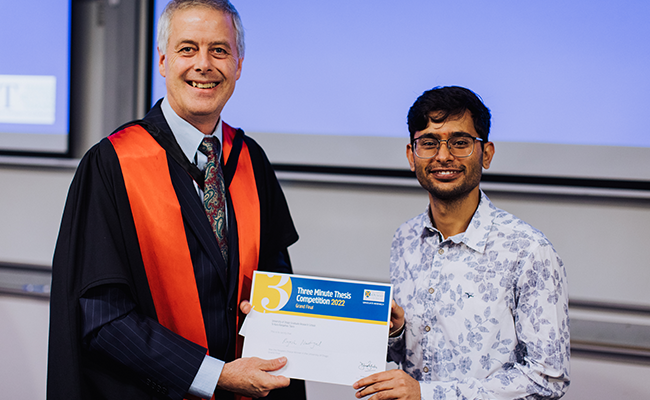 PhD candidate Rajesh Nautiyal, on the right, spoke about yoga tourism in India.

PhD candidate Rajesh Nautiyal won the People’s Choice Award and was the runner-up for the Doctoral category and at this year’s Three-Minute Thesis Competition (3MT).

Nautiyal is based in the Department of Tourism and presented on his current research entitled, “Why (and should) I pay for ancient practice?”, which explores product development in yoga tourism, specifically in the context of the yoga destination Rishikesh in India.

“I was so focused on delivering my presentation that when I was announced as the winner of one award and a runner up for the other, I was quite taken aback,” Nautiyal says.

“I am so grateful to all the people who voted for me as the People’s Choice, a major highlight to add on top of coming second in the Doctoral Award, and it could not have happened without all the support that the Department of Tourism and Otago Business School has provided to me.

“I am particularly thankful to my family, friends and my supervisors, Dr Julia Albrecht and Associate Professor Anna Carr, as well as my research advisor Professor Brent Lovelock, all of which have been patient with me throughout my journey.”

His research journey began a year ago when, as a yoga practitioner, he was offering free classes to fellow PhD candidates, who suggested that he incorporated his passion for the practice directly into his research. 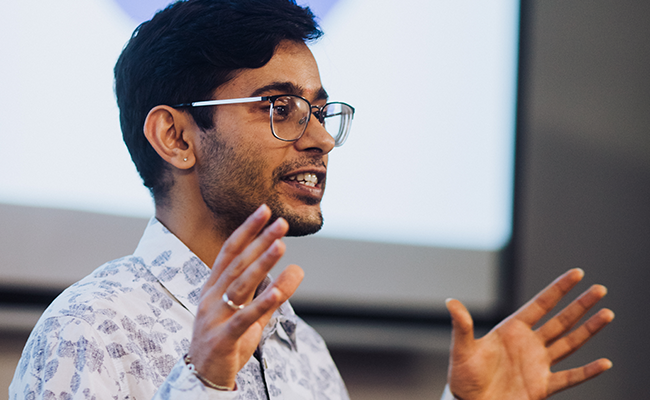 Nautiyal is thankful for the support his family, friends and supervisors have given him during his PhD journey.

Originally, he was sceptical of the idea, but once he began properly investigating it, he realised that there had been very little research about yoga tourism and that it had considerable social significance.

His fellow candidates’ encouragement was then mirrored by supervisors who also supported this avenue as a meaningful one for research and later, would also encourage him to present this at the 3MT competition.

“And so my research began and I started investigating product development in yoga tourism, particularly focusing on the city of Rishikesh because this is known as the “world capital of yoga”; a destination that has even attracted The Beatles,” Nautiyal says.

“Yoga experiences are offered in various places like yoga studios and so I wanted my research to focus on these types of places and uncover how yoga providers package this as a tourism experience.

“Though the PhD journey can be a bit like riding a roller coaster, especially with the challenges brought about by COVID-19, I have to say that my experience has helped me think beyond just becoming a good researcher but also towards being a meaningful global citizen.”