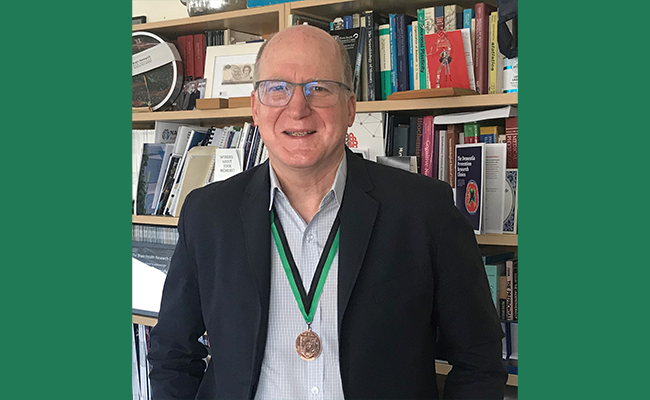 The award, presented by the New Zealand Association of Scientists earlier this month, honours a lifetime of outstanding service to the cause or profession of science.

Professor Abraham, of the University of Otago’s Department of Psychology, is highly regarded for his contributions to the understanding of brain plasticity, particularly synaptic metaplasticity and its implications for human behaviour and mental health.

His ground-breaking work has introduced a new way of thinking about the complex interactions involving neurons in the brain and its learning and memory systems.

This new paradigm led to crucial insights into the mechanisms underlying addiction, chronic pain, and Alzheimer’s disease, while also informing the development of new approaches to disease and brain injury management.

He is “thrilled” to receive the award.

“Some of New Zealand’s finest scientists have received the Marsden Medal so to be counted amongst them by my peers is an honour,” he says.

He is also quick to recognise those who have worked alongside him, from collaborators, to students, his family and the public.

“I’d like to acknowledge all the great people I’ve worked with over the years, not least my wife Philippa who has supported me through my career – this achievement is not something I’ve done alone.”

On presenting Professor Abraham with the award, the Association commended how he uses his standing as an internationally eminent neuroscientist to advance culturally competent neuroscience research and practice in Aotearoa New Zealand.

Having immigrated to New Zealand from overseas, he quickly identified how the country’s neuroscientists would benefit from working together and being in closer contact with each other.

When reflecting on his career, he believes he has helped foster these connections in a few key ways.

The first was helping organise, and then chair for 12 years, the Australasian Winter Conference on Brain Research, New Zealand’s annual neuroscience meeting.

He also helped found and direct the Brain Health Research Centre at Otago as a more localised approach to bringing researchers together and engaging with the public, while also providing encouragement for Māori students to get a taste for neuroscience research.

This focus was amplified when Centre of Research Excellence funding was awarded to Rangahau Roro Aotearoa - Brain Research New Zealand.

Professor Abraham co-led this organisation’s more than 80 researchers and clinicians as they shaped a national, culturally informed response to the country’s growing need for high-quality care of the ageing brain.

This new project aims to foster a workforce which mirrors the communities it serves and to facilitate translational neuroscience research that achieves equitable brain health outcomes for all New Zealanders.

He is excited to see what the future will hold for neuroscience.

“The University of Otago has a long history of excellence in the neuroscience field. I think it’s important for Otago to continue to lead in this area and it’s great I’ve been able to make a contribution to that.”