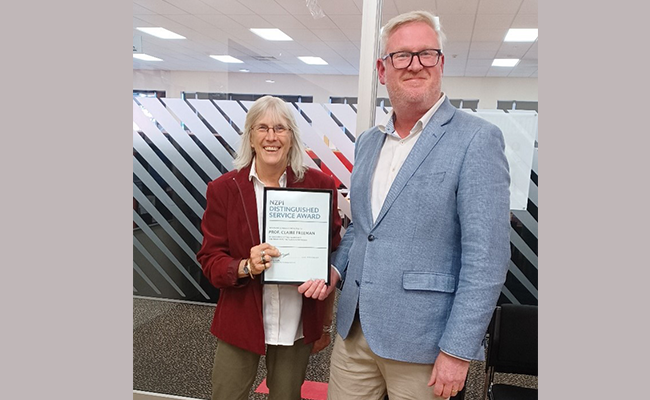 The award citation for Professor Freeman states: “Her depth of service to planning in Aotearoa and her contribution to planning knowledge and literature are the reasons she has been recognised.

“Her original research over more than two decades has both led debates on what good planning should try to do and informed policy and practice in Aotearoa and overseas.”

Professor Freeman’s research spans three main areas: planning for and with children and young people, planning for urban biodiversity and planning for sustainable communities and places.

“When I began there was no recognition that planners should consider, include or work with children, now it is far more accepted and recognised and I’d like to believe I played some role in this,” Professor Freeman says.

“I’ve taught planners now for over 30 years and love seeing them go into and usually stay in what is a fulfilling, important and valuable career, doing what I think is the fundamental aim of planning: ‘making better places - together’.”

Before joining Otago, Professor Freeman was with a university in South Africa near the Botswana border, where she lectured geography and researched the relationship between drought and social change: “a precursor for my interest in changing environments and climate change”.

She also worked as a planner for the Urban Wildlife Trust in Birmingham in the UK. As the first urban wildlife trust this has played a huge role in pushing recognition of nature in urban areas.

Professor Freeman says she’s one of three academics to receive this Award and that “it’s great to see recognition of the role we as academics play in supporting planning profession and practice”.