Researching research and uplifting “the homies” 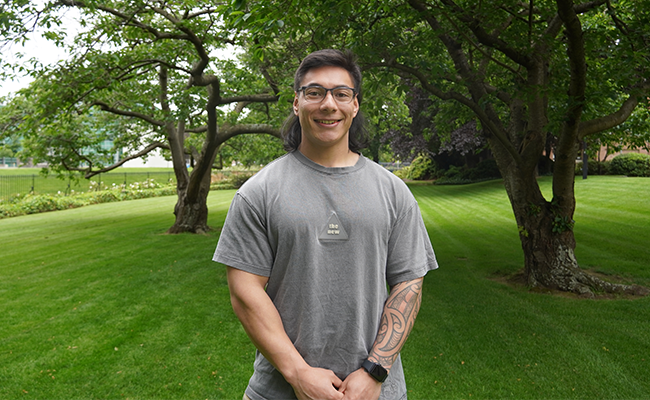 Pacific health research generally leads with the best of intentions, but does it actually have an impact?

For his postdoctoral fellowship funded by the Health Research Council (HRC), Dr Ruhe will create a tool that will measure the impact of Pacific health research on Pacific communities.

This tool will be an extension of a version of the Tivaivai research framework that he developed as part of his PhD.

He wants to help researchers move away from researching Pacific communities “for the sake of research”.

“A lot of the time, Pacific communities just become subjects of research for outcomes that don’t necessarily serve them in the long term.”

Researching research is not unknown territory for Dr Ruhe who became interested in this “meta” perspective while completing his honours, where he looked at Pacific research methodologies and models of health.

The first phase of his project will look at models that measure research impact within Aotearoa and other indigenous populations.

He will then meet with community groups to get their perspectives on what impactful research looks like to them and what outcomes they would hope for following health research.

The final phase involves workshopping ideas about what impactful research looks like with Pacific health researchers across universities in Aotearoa.

“I just get to learn. It’s going to be a huge humbling process of me having to revisit my own thoughts about what I think Pacific health research is as well,” he says.

From this consultation he will develop a tool, for use in the Integrated Data Infrastructure, to assess the impact of research and approach certain Pacific communities to put it to the test.

Dr Ruhe will pilot the tool by identifying a health issue important to various Cook Islands communities in the South Island at the time and apply his model.

Dr Ruhe says the tool is ultimately designed to “uplift the homies” and the work that is already being done to drive Pacific communities forward.

“Our communities are already doing awesome work, but now you’ve got a tool to be able to measure just how well it’s working.

“We can go in and use this tool to evaluate what they’re already doing and then perhaps lobby for more funding for them.”

He also wants traditional Pacific ways of thinking and collecting knowledge to not only be recognised as scientifically valid, but for it to also be prioritised when conducting Pacific health research.

“I want Pacific methodologies and Pacific ways of relationality to be normal and to be considered as a valid form of conducting and collecting information.”

He hopes researchers will see the importance of creating relationships and building cultural capital when conducting Pacific health research.

“It’s you volunteering time at community events, it’s you being part of cultural groups so that you understand the lived realities of the people you’re working with. That builds your cultural capital.

“You don’t have people speaking to you and opening up to you unless you have that relationality,” he says.

This grant, valued at $430,102, is Dr Ruhe’s fourth grant from the HRC. In 2015 he received a summer studentship to study fall risk in Pacific elderly and their attitudes towards fall prevention.

“That was cool because that actually changed some of the curriculum they had for the elderly programme to put more falls-focused stuff into it.”

His second grant tested the Tivaivai research methodology and a self-developed circuit-based exercise model that revolves around the preparation of food and Cook Islands dance.

That was followed by a knowledge translation grant.

The HRC has provided “really good stepping stones” that have helped develop him as a researcher, he says.

Dr Ruhe was grateful to be going through the HRC’s application process alongside his colleague Professional Practice Fellow Leina Isno, who also received funding for her research on scrub typhus in Vanuatu.

“There’s a certain struggle when you’re going through an application phase because you have to do it on top of the work that you’re already doing. That’s unpaid time and it’s for something that’s not guaranteed.

“I try to keep pretty chill and say if it happens it happens, but it becomes your world. You try and act like you’re not going to be upset if it doesn’t happen but there’s so much of you that you put into the application and it was nice having someone else who knew exactly where you were at.”

Dr Ruhe was also recently a recipient of the 2022 University of Otago’s 20Twenties Young Alumni Awards.

Dr Ruhe will start his postdoctoral research project in June next year.