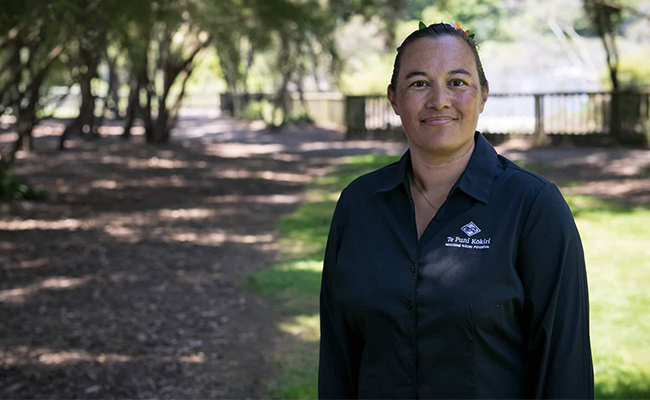 There is, however, little research to understand the role that the Māori Land Court plays in modern Aotearoa New Zealand, something which has motivated Master of Laws student, Margaret Courtney, to pursue research in this area.

Courtney (Tūhourangi-Ngāti Wāhiao, Ngāti Whakaue, Tapuika, Ngāti Umutahi) completed a Bachelor of Laws at Waikato University before completing her Master of Indigenous Studies (2018) and Master of Laws at the University of Otago in August 2022.

“After completing my bachelors, I worked in Hamilton for Housing New Zealand and then for the Māori Land Court before moving home to Rotorua where I continued at the Waiariki Māori Land Court within the same role.

“I really enjoyed the work there. Not only are you helping whānau to work through a court process of whenua reclamation, but you wade through the Court records through generations making whakapapa connections that some never knew existed.

Eager to pursue further study, Margaret began research into how her own whenua had been impacted by the Native Land Court.

“I decided to do my Masters of Indigenous Studies on the Native Land Court, specific to whenua at Tarawera and the systems of how the once bigger Rotomahana Parekārangi block had been divided up and how my whānau became a very small owner. This was both an educational and personal journey for me.”

Today, part of this block of land is located within Te Wairoa Buried Village, a long-standing tourism operation. The village was created by excavation from the 1886 Mt. Tarawera eruption near Rotorua.

Courtney’s tupuna lived and worked at Te Wairoa prior to the 1886 devastation.

“I thought that’s where my learning would stop but then I wanted to get back into the legal way of thinking and writing, and so decided to pursue a Master of Laws.

Margaret’s research centres on the various roles of the Māori Land Court within the contemporary environment, drawing on publicly available material including transcripts and submissions to help determine the roles.

“My interest initially came from wondering why the Māori Land Court was referred to as the ‘people’s court’, then this morphed into questioning its place and role in the modern New Zealand legal system.

“At the beginning of writing my thesis I thought there were only three main functions of the court - adjudication, protection, and facilitation.

“Investigating these three descriptors in a historical and contemporary context found that historically, they were never in the interest of Māori. The protector role represented legislative protection and could be manipulated to enable alienation. The function did not protect cultural connection to the whenua, but rather ensured that there were fair dealings.

“The Native Land Court’s role was seen as paternalistic.

“Since the Te Ture Whenua Māori Act 1993, the meaning of those three roles has shifted to be somewhat in the interest of Māori.

“In contemporary time, the facilitator role is there to facilitate and assist Māori to develop, utilise, and occupy their land as well as facilitating discussion between whānau so they can come to resolutions by themselves.

“The promoter role was found to promote the retention of whenua, whakapapa links and the connection that Māori intrinsically have with their whenua and natural environment.”

Courtney’s research also looks at the perspective of landowners and trusts, digging through and drawing on information through submissions detailing experiences with the Māori Land Court.

“Although the role of the court from a landowner perspective is shaped by their experience of going to the court, there were still similarities between them. Many submissions detailed the importance of the protector role in bringing balance to minority landowners as most often the majority shareholder trumps.”

For Māori, going through mediation and the court process is often a long enduring task that most often systematically pits families, who are linked together by whakapapa, against one another.

“The individualisation of land is a real colonial concept to do with ownership. The Court system was imposed on us and now we are dealing with the ramification of it. Whānau now endure, in some cases, rigorous proceedings.

“Every generation, the shares get smaller and smaller. For some it won’t be worth much in terms of a monetary value but there is still the cultural connection to the whenua that our people seek as a method of reconnection to their identity and where they come from," she says.

In the publication He Pou Herenga Justice Williams said the biggest challenge for the Court is the continued individualisation of titles. He states:613

“… the inevitable consequence of hyper-individualisation, which is the creation of tiny interests with little relevance in the lives of Māori landowners. It makes it hard for communities to maintain a meaningful connection. The nature of ownership system itself made moving forward in a Māori way always very difficult, because it was designed to achieve the opposite effect, of course.”

“The system was imposed on us, and we’ve had to live with it, which is why there needs to be a discussion about the role of the court and whether it continues to be that.

“It’s important that research is and continues to be conducted to uncover how it can continuously evolve into one with the aspirations of whānau at the heart of its design.

“There has been a raft of studies done over many years on Māori land tenure, but the Court still exists in the same format that it always has. There needs to be some type of disruption and innovation to see how best it can move forward if that is the wish of the people.

“The bigger question, therefore, is, can there be change and what a remodel would look like?”

Courtney refers to the work of Otago lecturer Mihiata Pirini (Tūwharetoa, Whakatōhea), who completed her thesis on the Māori Land Court in 2020 after the failed 2017 reforms. She considered a design process incorporating landowners’ participation and views of the court.

The judiciary have also held a long-standing view that empirical research should be undertaken to uncover if the Act is a barrier to Māori land development.

“So, between that design process and understanding the roles of the court, we then need political goodwill and necessary government resourcing to try make innovative change.”

Courtney wishes to acknowledge the support of her supervisors throughout her years at Otago University including Dr Paerau Warbrick, Professor Jacinta Ruru and Dr Bridgette Toy-Cronin.