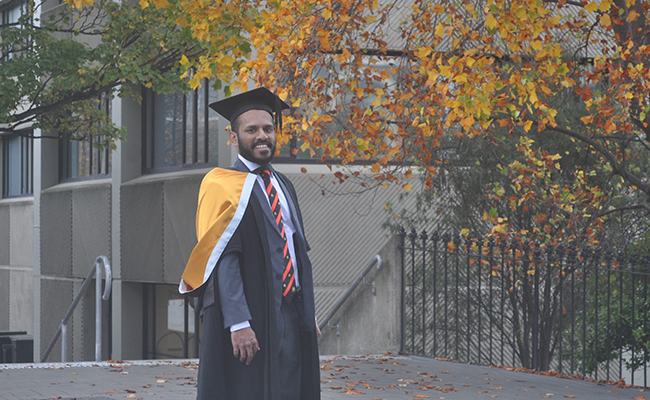 Moses Muhwannah Tekwie wants to use his time at Otago to honour his father’s legacy at home in Papua New Guinea.

Moses, who graduates in absentia on Saturday with a Master of International Business with Distinction, went through unimaginable heartbreak when both his father and “cousin brother”* died only a short while before he was set to depart for New Zealand.

“He spent 27 years of his life advocating for free trade zones in Papua New Guinea and the Oceania region both as a politician and private citizen. He was not only my dad but he was also my leader. I will not be able to fill in his shoes for sure, but I would do my best to continue his legacy.”

Moses was awarded a New Zealand Scholarship from the Ministry of Foreign Affairs and Trade, a feat his family and community were incredibly proud of.

“I was all excited looking forward to coming here for studies and then that happened. You start to question yourself. It puts you off your focus. But I thought about what they would do if they were still around. They would want me to pursue my aspirations and coming here to New Zealand they would say ‘go for it, get it done’! My dad has always been someone who strongly encouraged higher pursuits in education. He would say ‘go get it my son!’ with his usual fist pump in the air.”

The double blow of losing two of the members of his tight-knit family was further compounded when another cousin brother died just three months after Moses’ arrival in New Zealand.

He refused to let his loss stop him from achieving his goals, using his father’s emphasis on education as a motivator to complete his studies.

“There are others out there who are in worse circumstances than I am and they pull through. So I used that as my encouragement and my motivation to keep pushing on.”

Some of the first words out of his mouth when Moses describes his time at Otago are “mixed”. That’s because one of the happiest moments of his life happened right on the Clocktower lawn. 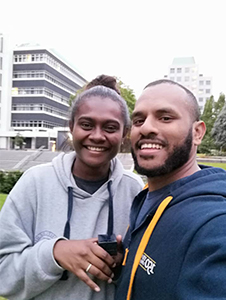 Moses’ girlfriend Maggie Tsora came to Otago on an NZ Scholarship the year before he did. She helped him apply for the scholarship and she even organised his flat for when he arrived.

The couple have been together since meeting back home as undergraduates in 2011. On Christmas morning 2019 Moses took her to the Clocktower and much to her surprise he proposed. She said yes!

“If there’s anything I’ll take away from my journey here at the University of Otago, it is getting educated at one of the top one per cent universities in the world and proposing to the girl of my dreams. I will always remember that.”

Prior to coming to New Zealand Moses completed his Bachelor in Business and Management, majoring in Strategic Management, at the University of Papua New Guinea before working in various sectors including petroleum, mining and government for eight years in both Australia and PNG.

Moses wants to return home and continue to contribute to the development aspirations of PNG, but most especially for his province of West Sepik through consultancy utilising his newfound qualification.

“That's something that my dad was very passionate about. He spent 27 years of his life advocating for free trade zones in Papua New Guinea and the Oceania region both as a politician and private citizen. He was not only my dad but he was also my leader. I will not be able to fill in his shoes for sure, but I would do my best to continue his legacy.”