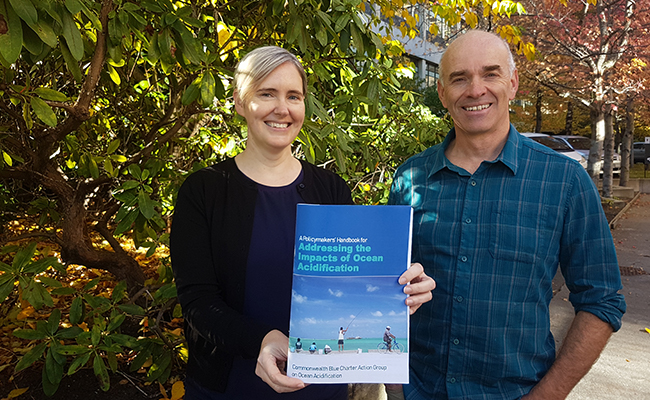 Dr Christina McGraw from the Department of Chemistry with Professor Cliff Law, who holds a joint position with NIWA and the University of Otago.

A Policymaker’s Handbook for Addressing the Impacts of Ocean Acidification has recently been launched to help Commonwealth countries tackle the global issue of ocean acidification, a key aspect of climate change.

“Our hope is that policymakers, and especially those from Small Island Developing States, use this handbook to identify and implement specific strategies to address ocean acidification.”

An initiative of the Commonwealth Blue Charter Action Group on Ocean Acidification, the handbook project was led by Dr Christina McGraw from the Department of Chemistry collaboratively with NIWA, including Professor Cliff Law and Dr Kim Currie, and Marine Science PhD student Jesse Vance.

Dr McGraw says New Zealand stepped forward to lead the Commonwealth’s Blue Charter Action Group on Ocean Acidification in recognition of the role the oceans place in our cultural, social and economic wellbeing.

“We are continuing this work by linking science with policy to help policy makers across the world address ocean acidification.”

At the Commonwealth Blue Charter Action Group on Ocean Acidification meeting held in Dunedin two years ago, policymakers identified the need to assist Commonwealth members to address the impacts of ocean acidification by identifying strategies for marine monitoring, capacity development, ocean literacy, governance, and management. The handbook, commissioned by the Ministry of Foreign Affairs and Trade, works to address this need.

Dr McGraw says a lot of scientific information exists about ocean acidification, but it isn’t accessible to policymakers.

“The handbook contextualises the scientific resources so policymakers can develop clear and region-specific actions to address ocean acidification.”

“Our hope is that policymakers, and especially those from Small Island Developing States, use this handbook to identify and implement specific strategies to address ocean acidification.”

Professor Law added that there are different strategies to mitigate the effects of ocean acidification, some of which provide co-benefits, particularly in coastal regions.

However, these strategies need to be assessed in relation to the ecosystem under threat and the resources available, which differ between Commonwealth countries.

The handbook was launched at a special web event in collaboration with the Commonwealth Secretariat, which included an opening address from the Minister of Foreign Affairs, Hon Nanaia Mahuta.

The handbook also supports the United Nations declaration of a ‘UN Decade of Ocean Science for Sustainable Development’, which began in 2021 and provides a focus on ocean research and opportunities for connecting ocean science more meaningfully with society.

“One of the core objectives of the UN Decade of Ocean Science is to build capacity and capability in Small Island Developing States, many of which are in the Pacific,” Dr McGraw says.

“This should be done in a way that recognises and embraces local and indigenous knowledge, and there is a lot of great work happening at Otago supporting this space right now.”