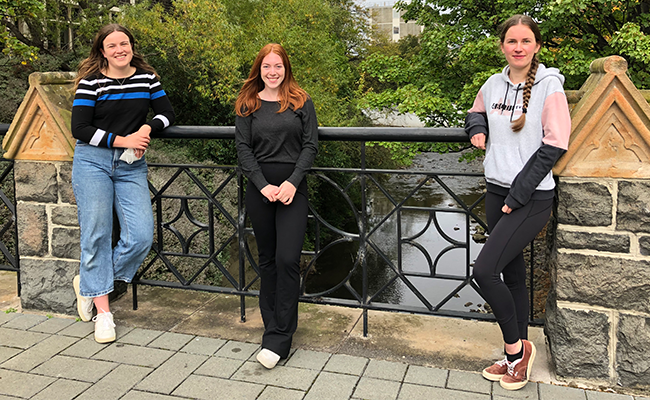 The three winners are, from left to right, Katie Fenton, Cailie Ward and Johanna Kann. Photo by Guy Frederick.

The Department of Conservation (DOC) recently announced its 10 postgraduate scholarship recipients for 2022, and three of the winners are from Otago University – Katie Fenton, Johanna Kann and Cailie Ward. Each of the three winners are in the second year of their master’s degree.

Katie was wanting to do a project that looked at estuarine systems for her Master’s in Marine Science, and cockles “fit the bill”.

The shellfish, also known as tuangi in the North Island and tuaki in the South, are found along Aotearoa New Zealand’s coastlines in sandy and muddy estuaries.

Katie and her family would harvest cockles together.

“I didn’t eat them much growing up, but I had family who did. They are quite an important taonga species, but also just eaten by a lot of people recreationally,” she says. 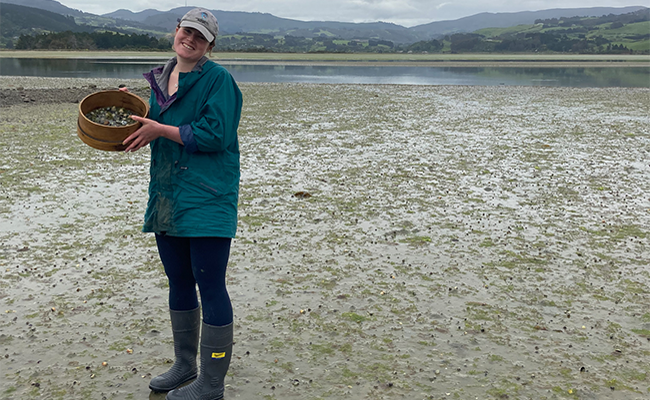 Katie collecting cockles. Dunedin has an especially high abundance of cockles compared to some other parts of Aotearoa New Zealand. Photo supplied.

“I do field work most weekends, and when I’m out, you’ll see heaps of families out collecting them. I love that there’s this connection between kids and the environment through that.”

Katie’s project is specifically focusing on how cockles react to stressors within the environment, and how they can be supported against these stressors for the future.

“I love the idea of supporting our ability to continue harvest. I think it would be a real shame if we ended up in a position with families not being able to harvest shellfish because of poor management.”

One of the main stressors cockles face is eutrophication. Upstream, there will be farms or forestry blocks sending sediment and nutrients downstream, which then settles in the estuary. 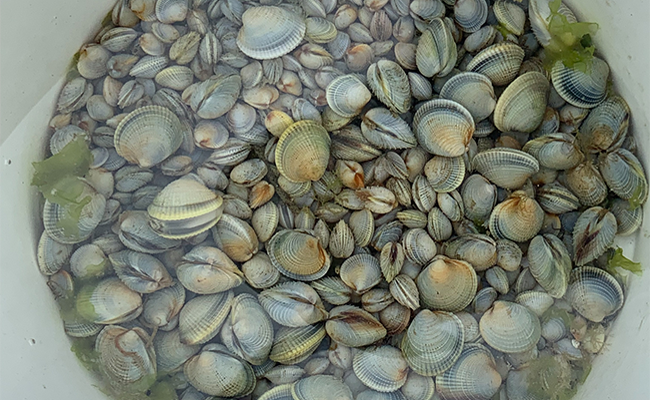 One issue cockles face is eutrophication of their environment. Photo supplied.

This causes a build-up of seaweed and algae blooms, Katie says.

Large amounts of bacteria on the seaweed and algae blooms use up a lot of oxygen within the estuary, choking other nearby species, such as the cockles.

Katie is based at the Portobello Marine Laboratory while she works on her project.

“I’ve currently got about 20 crabs out here at the aquarium and I’m looking at whether they predate on these cockles differently depending on whether these cockles have been oxygen stressed.”

Cockles are classed as endemic in New Zealand, and they are in decline throughout the country and particularly in Northern regions. However, Dunedin has an especially high abundance.

Katie says the $8000 scholarship from DOC was very helpful.

“It just makes it much more feasible to focus entirely on my research.”

It was great that DOC was supporting three students from Otago who were all doing different things, she added.

Johanna arrived in Aotearoa New Zealand about five years ago having finished her undergraduate degree in Germany. She travelled a bit and worked in a bird park in Queenstown for a couple of years.

After gaining residency, she decided to stay and do her Master’s in Zoology, rather than return home. 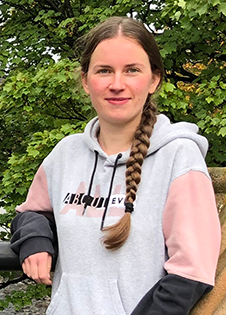 She has always had an interest in conservation genetics and how they can be used to inform management of threatened species, she says.

“To help those species last a bit longer and hopefully grow in population numbers again.”

Her supervisor recommended the mōhua as a project for her. There are a couple of small mohua populations in Glenorchy, so it was nice having birds near to Queenstown, where until starting the MSc degree she had spent most of her time in New Zealand.

At one point the bird was classified as recovering, however, the Mōhua Recovery Group recently requested the birds status be reassessed, and it is now classed as vulnerable.

Almost all of the mainland populations are in decline by up to 70%, and were likely to stay that way for the during the next 10 years – which is three bird generations – if nothing changed, she says.

The birds are found around in the South Island in places such as the Catlins, Fjordland, Dart and Huranui, and some have been transported to predator free islands such as Anchor Island and Whenua Hou, Johanna says. 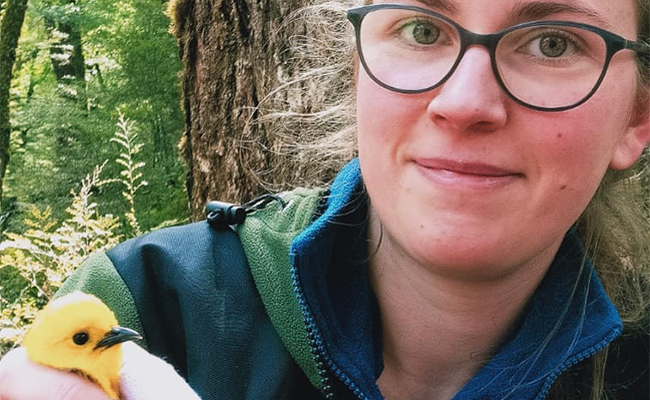 The mōhua are found in the South Island and on a few predator free islands. Photo supplied.

“There are around about 21 core populations at the moment.”

The deforestation that took place when Europeans colonised Aotearoa New Zealand resulted in habitat loss for the birds. Predators are a big issue for the birds nowadays, as well.

The birds are “hole nesters” meaning they make their nests within a hole in a tree, Johanna says.

Typically, there is just one hole which serves as both entrance and exit. This means when a stoat climbs the tree, there’s nowhere for the birds to go.

“They are preyed upon really, really easily because they don’t have a way to escape.”

Johanna says the $8000 scholarship from DOC would be “very helpful” and she planned on putting the money towards the cost of living.

“I guess if I can work a little bit less because of that, I will be able to try and get out and do some field work or volunteer, that would be great as well.”

Cailie’s research is trying to resolve the phylogeographic structure and taxonomy of Paryphanta snails found in Northland.

“I’m trying to determine if two sets of snails are the same, genetically, or not,” she says.

“The genus contains at least two species, but we haven’t yet figured out which populations are part of which species. Knowing this and their genetic history will help us to better conserve these snails in the future.” 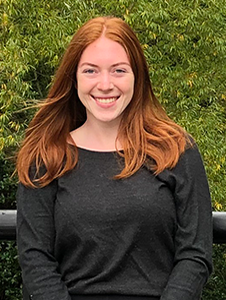 For her undergraduate degree, Cailie majored in zoology and genetics, with a minor in science communications. She says she would have worked with any type of animal for her Master’s in Science.

She approached the two supervisors she wanted to work with to find out what projects were available. There were two projects on snails on offer – snails being her supervisors area of expertise, and Cailie chose the one she has because it meant she could put to use aspects her science communications qualification.

The snails are “very endangered” and face a lot of threats, namely, deforestation and being eaten by pigs, she says. The threats the snails face aren’t unusual, but having such a small population size puts them at a greater risk. 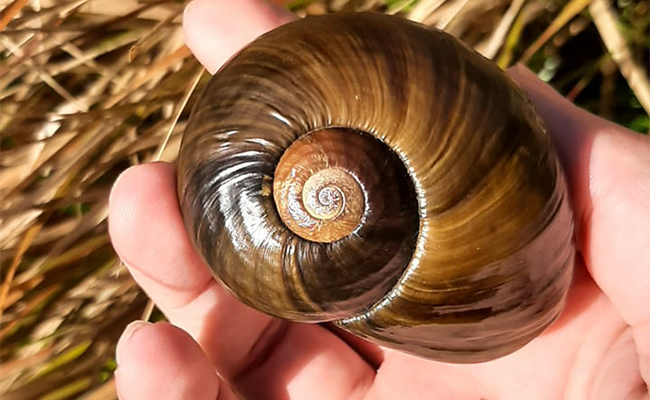 Paryphanta snails can be found in Northland. Photo supplied.

Cailie plans on travelling north to visit the snails in their natural habitat, while the University and Te Papa Museum also both hold snail samples that she can access.

Cailie was surprised to have won the DOC scholarship, but it made her “very proud” of herself.

“To have support from DOC as well, to have them involved in my project is really good. Seeing that they care about these snails really means a lot.”