Polio, also known as poliomyelitis, is a highly infectious viral illness which can cause lasting damage to the nervous system, including paralysis. Children are most vulnerable but people of any age can contract the virus.

The first vaccines were developed in the 1950s and 1960s and polio is now highly preventable. There is, however, no cure and so prevention of transmission through vaccination is the only way to reduce the long-lasting health effects of polio.

A global effort to eradicate polio began in 1998 and the New Zealand Paediatric Surveillance Unit contributes to this goal through monitoring acute flaccid paralysis, one of the effects of polio, in New Zealand. In 2017, there were 22 reported cases in the world. Afghanistan and Pakistan are the only remaining countries where polio is endemic. In the Western Pacific region there is an outbreak of vaccine derived polio in Papua New Guinea. For up to date infromation please click here

For more information on polio vaccination in New Zealand, see the Ministry of Health website 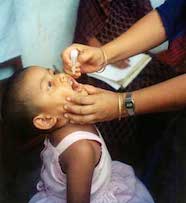