Associate Professor Peter Fineran, Microbiology and Immunology, is investigating the regulation of the CRISPR-Cas bacterial immune systems, which could have far-reaching implications for bacterial evolution and antibiotic resistance.

CRISPR, the sophisticated technology for editing genes making headlines worldwide, originated in bacteria as a type of immune system. We commonly think of bacteria as the germs that cause disease. However, bacteria themselves are continuously under threat from viruses and other invaders. As a result, many bacteria have developed this sophisticated ‘immune system’ to recognise and eliminate foreign genetic material. This system also allows bacteria to develop a ‘memory’ which allows them to recognise and disarm future attacks.

The fundamental biology of the regulation of CRISPR-Cas remains poorly understood. In particular, how it is regulated to provide a comprehensive defence against foreign genetic material without causing ‘auto-immune’ problems. Associate Professor Peter Fineran and  Associate Professor Paul Gardner (Biochemistry), and their team, have been awarded a Marsden Fund grant to study how bacteria regulate this immune system.

The research team will develop and employ state-of-the-art methods to unravel the full network of CRISPR-Cas regulatory genes. These genes allow ramping up of the CRISPR-Cas defence when a bacterium is most vulnerable to attack. They also defuse the inherent danger of 'autoimmunity' of this system when the host bacterium is not under threat.

Associate Professor Peter Fineran says: "Flow cytometry is critical for us to develop and utilise a new cutting-edge technique to identify factors that influence CRISPR-Cas activity. Leah Smith, a current PhD student, has begun to develop this method and has shown its feasibility. We anticipate this method will also be of wide appeal for the study of gene regulation in general in other bacteria.”

By understanding CRISPR-Cas regulation, CRISPR-Cas systems could be modulated for improved outcomes, such as limiting the spread and acquisition of antibiotic resistance genes and developing CRISPR-based antimicrobials. This work will provide new insights into one of the hottest topics of modern molecular biology. 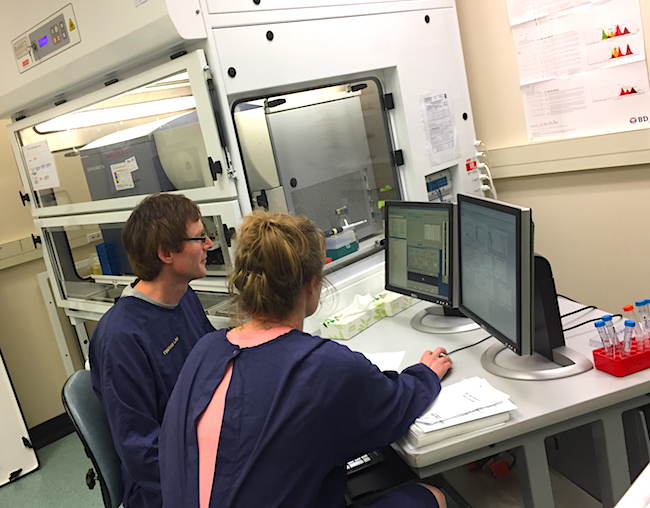 Associate Professor Peter Fineran and Hannah Hampton (who will join the team shortly), in the Flow Cytometry Suite at the University of Otago. Photo: Htin Aung.

What is flow cytometry?

Flow cytometry is used to analyse the physical and chemical characteristics of particles or cells carried in a fluid stream as they pass through at least one laser. Fluorescently-labelled cell components are excited by the laser to emit light at varying wavelengths, the emitted light is measured by detectors.