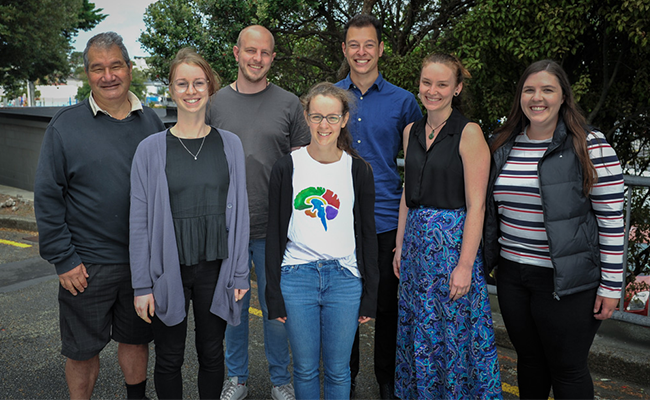 The University of Otago Postgraduate Association of Wellington (O-PAW) is moving to improve links between students in the capital city.

O-PAW co-president Tom Bergen says since its inception in August 2021 the association has had multiple successes on behalf of its members. Tom shares the presidency with Emily Paterson.

Recently O-PAW was very happy to win an increase in funding which means Wellington postgraduate students can get subsidised visits to GPs and a mental health counsellor and are able to hire out facilities around the city for academic and social events.

O-PAW’s next goal is to get parity in student support with southern campus students, Tom says.

While it is hard living as a student anywhere, Wellington rents are particularly high compared to many cities, and the association believes student stipends for Wellington postgraduate students should be increased to cover that extra cost.

University of Otago, Wellington Dean Professor William Levack is very supportive of the University giving attention to the issues regarding the cost of living in Wellington and equity with students on other campuses, for both undergraduate and postgraduate student groups.

“The solutions to these problems will need PVC or possibly higher executive involvement. I can help raise and champion these problems, but I can’t address them without further University involvement,” he says.

Bergen says the recent closure of one of the University’s Wellington buildings due to its seismic rating meant some students had to move to other learning accommodation, which had been tough on the postgraduate student community.

Some students had even relocated to places such as Dunedin or Palmerston North because the labs they required were no longer available.

In addition to improving parity, Bergen says O-PAW is working hard to improve communication and foster a sense of community among postgraduate students, who are based across multiple buildings, including two hospitals, a new location in the central city, and soon a new building close to the original campus.

With the campus so spread out, it means a lot of people tend to work from home and don’t get those opportunities to network with each other, he says.

Many PhD students often isolate themselves, and he feels it is important to try and connect students with similar interests.

To that end O-PAW has started a regular newsletter letting students know what is going on around campus. It is also hosting monthly academic workshops, such as ‘Shut Up and Write’, which gives students who aren’t interested in attending social events an opportunity to connect in an academic manner.

“Networking and collaboration between researchers and future practitioners are incredibly important things to have, and to push people for.”

O-PAW hosts social events, such as bowling and after-work drinks, to unite both parts of the campus.

Bergen feels it is important for people to express themselves culturally and is pleased O-PAW has been promoting weekly waiata, karakia and Māori language sessions across both sites, led by University of Otago, Wellington students Helaman Luki, Denver Ruwhiu, and Te Rina Maise and Selwyn Te Paa.

O-PAW is also working to improve communication between staff and students in Wellington. There are about 350 postgraduate students studying subjects hosted at the Wellington campuses, Bergen says, including distance students.

Despite the association’s efforts, they are only reaching a small proportion of that number so far but are working hard to increase the membership.
Professor Levack says he is very supportive of the association and meets with O-PAW representatives monthly.

The University is in the process of appointing an Associate Dean (Postgraduate) who will further support O-PAW’s work, he says.